DX12: Harnessing the power of both integrated and discrete GPUs

The new Multiadapter feature in DX12 allows the discrete and integrated GPU in your computer to work together, resulting in big performance gains across the board. Microsoft’s Build 2015 conference revealed more about this exciting new feature in DirectX 12, which had been known for a long time beforehand.

The DirectX 12 Multiadapter feature allows the computer to utilize the integrated GPU on CPU’s alongside the discrete GPU for performance boosts. This isn’t a completely new principle, and in fact, AMD has tried this, but they never took off like DirectX 12 will do.

In the presentation, Microsoft showed a demo by Square Enix called “Witch Hunter Chapter 0” to showcase this amazing technology. The game showed an incredible 8K resolution, powered by four Nvidia GeForce GTX Titan X GPUs. The game was running at 35,9 FPS with the Multiadapter feature turned off, and 39,7 FPS with the feature turned on. 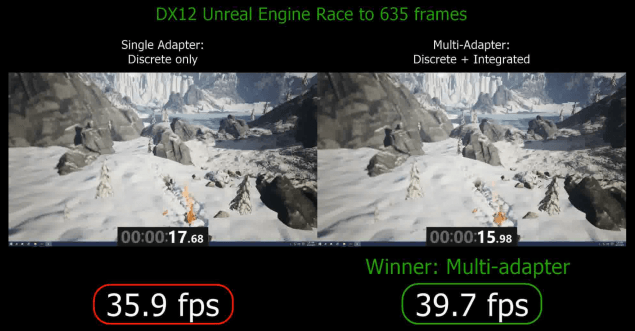 You can read more about the awesome presentation here.