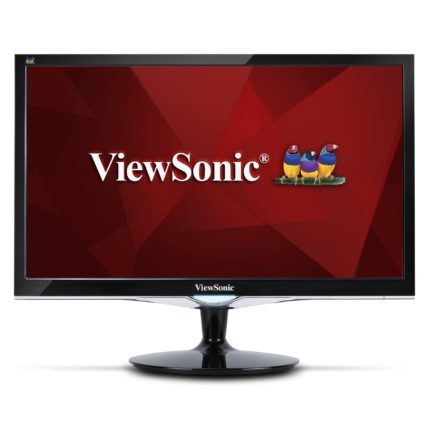 Are you looking for a computer monitor that is ready to go the minute you take it out of the box? The ViewSonic VX2452MH comes equipped with integrated speakers, a reliable display quality, and connectivity to computers as well as gaming consoles. For a wide variety of uses with an equally wide variety of digital media, this monitor stands up to the test of user-friendly affordability.

Specifications of the ViewSonic VX2452MH Monitor

First Impressions: the ViewSonic VX2452MH at a Glance

This monitor features slim bezels in a glossy black and clear plastic that look quite classy. A unique clear curved piece at the lower edge will glow blue when the monitor is connected and tried on. With its slim profile, the footprint on your desktop is negligible, and the monitor itself looks great.

At a glance, the overall quality of the picture is relatively sharp, although the screen does not deliver with some of the very dark and very light shades of gray, as often happens with TN panels. The two darkest grays are indistinguishable from black, and the two lightest grays appear whitewashed due to over compression.

In addition to the visual display, the ViewSonic VX2452MH also incorporates a pair of speakers integrated into the design. The speakers themselves are slightly tinny in their sound, but not so noticeable as to interfere with a gamer’s experience of the game at hand. For a gamer or video watcher, the integrated speakers complete the package of a monitor that is ready for full function the minute it comes out of the box. 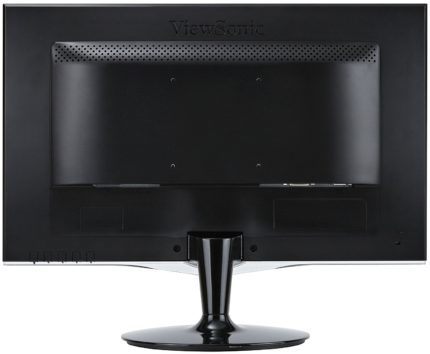 This monitor boasts 1080p Full High Definition resolution for good detail in viewing office work, videos, or games. The color quality is fairly good, although the green range of colors does not maintain integrity, being skewed well out of the ideal zone for those hues.

The ViewSonic VX2452MH has viewing angles of 170 degrees on the horizontal, and 160 degrees vertically. The anti-glare coating makes viewing easier on the eyes of the user. These angles for viewing are rather narrow compared to comparable monitors. A user who moves forty-five degrees off of center will find that dimming and color shifting are already affecting the view of the screen.

The display type for the flat screen ViewSonic VX2452MH is a TFT-LCD or thin film transistor liquid crystal display. The TN (Twisted Nematic) panel provides relatively bright display and a top resolution of 1920 x 1080. Its anti-glare coating helps hold off reflections and cuts glare for the viewer.

The LED backlighting found in this monitor will enhance performance of the display, delivering a stellar color range, while it is also adjusting the contrast ratios to create outstanding detailed images. The same LED backlighting additionally conserves up to 25% more energy than comparable conventional screens, and it is Energy Star Compliant.

The ViewSonic VX2452MH also features the ViewSonic proprietary Eco-mode feature, which comes as a standard offering with this display. It gives the user the choice between eighty-five percent or seventy-five percent modes of “Optimize and Conserve,” taking into account the working situation of the user.

Each of these modes will work to reduce the brightness of the display and conserve the energy being used by as much as twenty-five percent. If the ambient lighting is too dim (either of the room in which the monitor sits, or the game being displayed on the screen), this feature will adjust the screen’s brightness to optimize visibility and cut down on fatigue to the eyes. The Eco-mode will also prolong the lamp life of the monitor, so the user will not have the hassle or expense of replacing the lamp.

Features of the ViewSonic VX2452MH Screen

The ViewSonic VX2452MH uses proprietary Clear Motiv II technology to create a super fast response time of 2 ms, supporting images without blur. Gamers enjoy both the rapid response and the super high dynamic contrast ratio, providing crisp and sharp color images during games and movies. With integrated two-watt speakers and stereo sound, this screen is a favorite for multimedia high definition mobile devices as well as gaming consoles and desktop or laptop computers.

This model comes mounted on a standard stand, but also has a VESA-mountable design, offering a variety of flexible options for mounting, enabling users to create their own set-up options for video and gaming entertainment needs.

The ViewSonic VX2452MH is not touch screen enabled, but is instead using physical buttons at the side of the screen. At the right-hand side beneath the glossy black bezel, the user can easily access the four buttons for functions, as well as the power switch.

In addition to its specialty modes like Game Mode and Eco Mode, the ViewSonic VX2452MH offers an option of Flicker-Free viewing. The flicker free screen does not utilize pulse width modulation, which would continually flick the backlight LED off and on; instead, it utilizes DC modulated backlighting to keep up a steady current of DC power. Because the backlight itself is not switching off and on, the screen does not flicker at any of its brightness levels. For the user who spends long hours at the screen, this feature can measurably reduce eye fatigue and vision problems.

This model provides only basic settings for picture, namely contrast and brightness levels, as well as color temperature settings (the five options are warm, native, cool, blue, and sRGB). There is an option for User Color customization, and a user can manually adjust Eco Mode setting and Dynamic Contrast. The sound settings are limited to input settings, volume, and mute options.

Connectivity with the ViewSonic VX2452MH Monitor

The ViewSonic VX2452MH does not feature a display port or USB port, but it does have HDMI, DVI, and D-sub VGA. The monitor comes with HDMI cable, power cord, DVI cable, and VGA cable. The ports are located at the rear of the monitor, along with an input audio jack and an output audio jack for additional speakers or headphones, as well as a microphone.

The HDMI cable is widely considered the highest standard for maintaining true display clarity with digital media. It is also the connection of choice for gaming consoles and other devices, including laptop computers, desktop computers, DVD and BluRay players, digital cameras, and many other devices. In short, this monitor includes the most important type of connectivity for most users of digital devices.

The ViewSonic VX2452MH is not a feature packed model of monitor, but it functions well within the parameters for which it is set. It is a solid monitor for gaming and other functions and is often a go-to choice for budget-conscious consumers looking to get the most use out of a less expensive monitor. The integrated speakers and solid display quality make this a ready-to-use go-to option for gamers.

The affordable ViewSonic VX2452MH features a 1080p resolution on a 24-inch screen. The panel type is TN and it has a respectable 2ms response time.