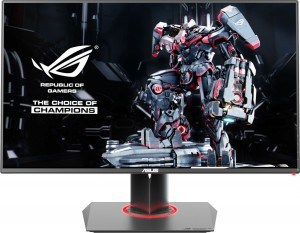 The world’s first 144Hz gaming monitor which offers both 2560:1440 WQHD native resolution and Nvidia G-Sync technology will have you stunned and admiring its flawless picture for hours. This ultimate gaming monitor is peculiarly great for FPS players who want to use all the advantages of quick responsive time, exclusive features and enjoy in a beautiful image at the same time. This ASUS ROG SWIFT PG278Q even offers some unique tools which will make you score more killing blows much easier. With its GamePlus feature set a custom crosshair on your screen and with it eliminate any chance of your enemies escaping your bloodlust.

ASUS ROG SWIFT PG278Q‘s perfectly clear image with crisp edges will ensure your full enjoyment in video gaming with its WQHD resolution which is 4 times more powerful than regular HD giving you 77% more desktop space than standard 1080p. The excellent resolution of 2560:1440 with 109 pixels per inch along pixel pitch of 0.233mm ensures that the picture will remain top notch quality and satisfy all customers.

Whether you’re passionately playing video games or resting by watching a movie, this 27″ magnificently designed gaming monitor will enrich your experience with its 16.7 million colors. EyeCare innovative technology along the TUV Certified Flicker-free screen makes gaming possible for hours on end without causing eye fatigue.

With this 144Hz gaming monitor’s advanced ergonomics you’ll be able to tilt (+20°, -5°), swivel (+60°, -60°), pivot (90°) and adjust the height up to 120mm. Additionally, it is secured by Kensington Lock Slot and is VESA mount capable if you lack room space or prefer safely hanging it on the wall. ASUS ROG SWIFT PG278Q’s beautifully black and thin design with LED backlit panel is equipped with air vents on its back securing cool display which keeps the screen fresh  when the battle in-game starts heating up.

In the box of ASUS ROG SWIFT PG278Q, you’ll find it fully assembled with its Display cable and Nvidia G-Sync drivers. Hook it up to your computer and within minutes you’ll be able to enjoy in full experience this monitor has to offer. Moreover, this elegant monitor is Nvidia 3D vision 2 ready but 3D glass don’t come with the monitor. Still, you will be able to enjoy state of the art technology with 1440p picture quality and 120Hz in both gaming and various 3D content already available in many games, Youtube videos and many other.

If your machine is powered by a Nvidia graphics card with G-Sync mode enabled, you will be able to achieve the ideal gaming experience with excellent graphics and the desired response time. Simply enable the G-Sync mode in Nvidia’s Control Panel and run a game in fullscreen; when the gaming monitor’s LED light turns red – it means you’re set to go. The refresh rate will stay steady which you can track yourself onscreen with GamePlus FPS counter while the image stays flawless and cut off any flickering and blurring.

Even if your video game is more demanding and your frame rate falls to 40-45 fps, ASUS ROG SWIFT PG278Q will manage to maintain the picture as if the refresh rate had never dropped thanks to the Nvidia G-Sync. 1ms gray to gray response time takes care of any ghosting and screen tearing you could encounter as the pixels change from one shade of gray into another, rather than from black to white. Although such change is invisible to the human eye, it is an upside as every pixel counts! 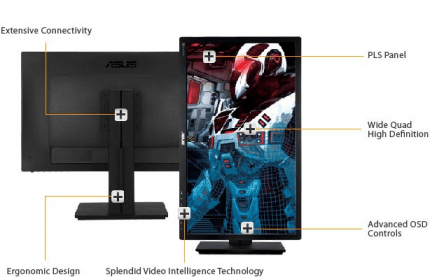 GamePlus is ASUS ROG SWIFT PG278Q’s secret and most powerful weapon which makes it distinct from all other gaming monitors. It is a built-in add-on which offers a variety of useful tools such as custom pinpointed crosshairs, FPS counter and a timer you can use as an alarm. This great feature is also available among other ROG gaming monitors.

Choose from 4 different crosshair styles or no crosshair at all if you’re a “no-scope pro“, and show your enemies no mercy. GamePlus FPS counter feature offers you the ability to keep track of your graphics card and monitor performance at all times, making it easier for you to observe and tune it. Additional turbo key is available which allows you to quickly and effortlessly change between preset refresh rates of 60Hz, 120hz, and 144Hz.

Ultra Low Motion Blur also offers three presets to choose from: Low, Normal, and Extreme depending on your desired activity on the screen. ULMB ensures better visibility in all FPS games giving you an easier and more fun way of tracking and targeting your enemies, without blurring of fast moving objects. However, it can only be used with 85Hz, 100Hz, and 120Hz and when G-Sync is disabled.

So, depending on what kind of game you’re playing you’d have to make a choice between the two. Generally, G-Sync produces much clearer and more beautiful picture while ULMB should be used in fast paced FPS games in order to avoid ghosting.

We found no better and easier navigation tool on any 144Hz gaming monitor than ASUS ROG SWIFT PG278Q‘s 5-way OSD joystick. The settings are pleasantly displayed with simple yet effective options including adjusting of contrast, brightness, and color through which you can navigate with ease using the joystick on the monitor. Also, you can disable the light glowing under the monitor in these options. The LED light on the monitor shines in five different colors and helps you distinguish in which mode of settings you currently are.

The only thing ASUS ROG SWIFT PG278Q is missing is some sort of feature which manages the really dark images. After the Sun had set down in your game and the night has approached you may encounter a little difficulty in hunting your prey. This is where the handy joystick comes to good use as you can quickly brighten up your image in the settings unless you’re playing horror games and welcome additional blackness and eerie mystery.

Some reviewers of ASUS ROG SWIFT PG278Q complained about the BackLight Bleed which is a common issue with TN panels. However, it is only troublesome if you’re looking at an entirely black screen which isn’t what the monitor has intended for anyway. It is nothing to worry about as it is unnoticeable in games. Additionally, angle viewing issues are minimal with angle degrees being 170° horizontal and 160° vertical. Along with its silky thin bezel 6mm design, it makes for an amazing multi-display experience.

Color reproduction tests showed that green color deviates from the desirable result while red and blue are close to ideal. Unfortunately, this means the monitor cannot be used for professional uses. In games, colors remain perfect and no deviations can be noticed.

There are no built-in speakers which are no big deal as most of the hardcore gamers prefer headphones. Two USB2.0 ports are available making it easy for you to connect your keyboard and mouse to the monitor, however, this means there are no extra slots for your phone or other devices.

Since G-Sync requires DisplayPort in order to work there is only one DisplayPort available. The absence of an HDMI port made some of the console gaming users disappointed making this 144Hz gaming monitor’s main customers PC users, preferably Nvidia ones with GeForce GTX650Ti Boost or newer graphics card.

Who is this product for?

Gamers who’d like their gaming monitor to have it all – instant response with the lowest input lag, elegant but steady design and on top of that beautiful image, will be more than satisfied with ASUS ROG SWIFT PG278Q. FPS players can take full advantage of GamePlus unique feature which makes this gaming monitor stand out of the many. Players with strong Nvidia graphics cards can use the full potential of this monitor and play games such as Battlefield 1 and Rise of the Tomb Rider with perfect 1440p picture and smooth gameplay.

As TN panels aren’t used by professional designers and such due to weak color accuracy, there is also a version of this gaming monitor with the IPS Panel – ASUS PG279Q (or ASUS ROG SWIFT PG279Q9.

Considering that this 144Hz gaming monitor is the world’s first monitor which has both WQHD and G-Sync technology that offer stunning picture quality and everything you might need to be eligible for competitive gaming, the price is more than justifiable. ASUS ROG SWIFT PG278Q’s high quality image and unique features make it ideal for elite FPS players. If you’re not willing to spend this much money on a gaming monitor you should check out Acer Predator XB280HKbprz which is a little less expensive but also excellent.