By Roger CrawfordJanuary 23, 2017 No Comments 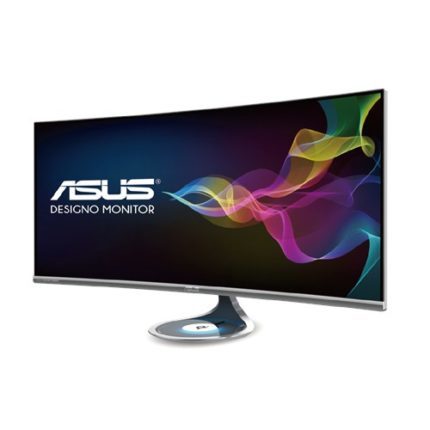 At the CES 2017, Asus has announced its biggest monitor yet, the ASUS MX38VQ also dubbed as the ASUS Designo Curve MX38VQ. It will feature an ultra-wide and curved 37.5-inch screen with the exclusive Qi Wireless charging. This beautiful office or home workspace monitor will also offer an amazing cinematic experience. The release date is unknown at the time of writing, but it is expected to be released sometime in the second half of the year.

Besides being one of the largest monitors on the market once it’s released, the ASUS MX38VQ will also be the ASUS’ biggest monitor they’ve ever made. This 37.5-inch ultra-wide curved monitor will feature a 2300R curvature that will offer an amazingly immersive experience for watching movies, playing video games or any other multimedia activity. With 3840×1600 resolution and 110 pixels per inch density, the picture quality is sure to captivate its users with a crisp and brilliant image.

Although marketed as a home and office monitor, it would be a shame if the ASUS MX38VQ is used only for professional purposes. Imagine having this beauteous monitor in your office and how hard it would be to resist the urge to open a video game or a movie.

The IPS panel of the monitor will offer the impeccable viewing angles of 178 degrees both horizontal and vertical. Meaning that you will be able to enjoy the flawless picture quality no matter at what angle you’re looking at the screen. You will also be able to enjoy constant and precise color quality that covers 100% of the sRGB color space which will suit the demands of semi-professional and aspiring designers.

The marketed response time speed value amounts to 14ms and 5ms gray to gray which will probably have to be enabled through some sort of ‘ultra-fast’ option in the overdrive settings. While 14ms response time is enough for a smooth experience in the everyday use of the monitor as well as some basic editing, the quicker 5ms option is excellent for casual gaming. Another excuse for you to play video games at the office!

The ASUS MX38VQ will feature the exclusive Qi Wireless Charging base which is a feature previously only present in some AOC and Samsung monitors. As the name suggests, with this feature you will be able to wirelessly charge your compatible mobile devices by just placing the device onto the base of the monitor and enabling the feature. Thus your phone can always stay within your range while you do you work.

The ASUS MX38VQ will also deliver an exceptional audio experience with the built-in stereo speakers of 8W. The Harmon Kardon speakers will along the ASUS SonicMaster audio technology hopefully deliver a quality sound capable of replacing the standard exterior speakers set. Additionally, with the flicker-less screen and blue light filter, you will be able to enjoy a full multimedia experience for hours to an end without feeling eye fatigue. 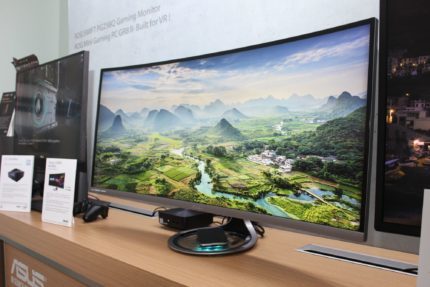 The appearance of the ASUS MX38VQ features a thin bezel and elegant design. It will be covered by a silver metallic finish that will make the monitor pleasant to look at even when it’s off. The sundial-inspired base will feature an aurora lighting that will shine in an icy blue color when the Qi wireless charging feature is active. Information regarding the ergonomics of the monitor is currently unknown.

The ASUS MX38VQ will feature two HDMI ports and one DisplayPort 1.2. There will be no USB hub as it would diminish the uniqueness of the Qi charging base. However, this may affect some users whose phones are incompatible with the wireless charging as they would rather prefer a USB port. Alas, they can always charge their phones through the computer USB port, anyway.

The official price and the release date of the ASUS MX38VQ are unknown. There are some reports that it will be released in the second half of the year and that the price will amount to around $1100. While that price may appeal tempting, it would disinterest most of the gamers who can get a monitor with the adaptive sync for that money. Nevertheless, it’s safe to say that for that price, the ASUS MX38VQ wouldn’t have a shortage of users, they just wouldn’t be gamers.

The ASUS MX38VQ will offer an immersive movie watching and video game experience while providing workspace offices with a beautifully designed and practical monitor that will replace most of the multi-display setups. With this stunning 37.5-inch 2300R ultra-wide monitor, you will be able to fully immerse into your work or any multimedia experience and enjoy it for hours, never regret a single penny spent on it.

With the vibrant and consistent colors of the IPS panel that cover 100% of the sRGB color space, you will also be able to do some basic content creating as well. To top it all, the exclusive Qi wireless charging feature and the high-quality built-in speakers come as a convenient bonus to the brilliant viewing experience. We cannot wait to see this beauty in action once it is released.

The ASUS MX38VQ will offer an awesome and amazing curved ultra-wide viewing experience with its 2300R curvature and vibrant colors produced by the IPS panel. The Qi wireless charging base and the 8W stereo speakers will make that experience more convenient and allow us to have fewer cables around our desk which is ideal as the ASUS MX38VQ will take up the most of it.