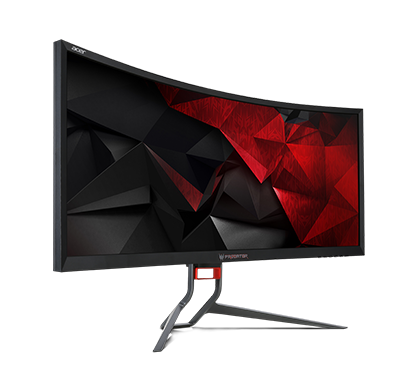 The Acer Predator Z35P ultra-wide gaming monitor features a VA panel with a superior contrast ratio, perfect 178-degree viewing angles, and vibrant colors. The panel offers 8-bit color depth and covers 100% of the sRGB color gamut although if the color accuracy and consistency is what you’re after, you should consider a designer monitor with an IPS panel. With its high contrast of 2,500:1, the display provides a superior relation between the darkest and brightest colors with an accent on deep black tones.

Besides offering you an immersive and stunning gaming experience with its colossal screen size and exceptional image quality, the Acer Predator Z35P ensures smooth gameplay performance as well. It’s the first monitor to go beyond 100Hz at the 3440×1440 resolution which will along Nvidia G-Sync and the quick 4ms response time make for an otherworldly gaming experience with fluent performance. Like most of the Nvidia G-Sync monitors, the Acer Predator Z35P seems to support the ULMB (Ultra Low Motion Blur) feature.

One thing to note is that the ULMB feature cannot be used at the same time as the G-Sync anyway, so you have to choose one or the other anyway. G-Sync allows you to synchronize the refresh rate of the Acer Predator Z35P display to the frame rate of a compatible Nvidia graphics card. This eliminates screen tearing, stuttering, and reduces input lag within the dynamic range which is in this case 30-120Hz. Overall, the smooth performance is ensured while the gigantic screen delivers a flawless image quality due to the rich pixel density of 106 pixels per inch and high-contrast VA panel.

Other features include the standard Predator series perks such as the aim-point overlays, on-screen timer, FPS counter as well as a blue light filter which eliminates the harmful blue lights and thus allows you to play for hours without straining your eyes. In addition, the Predator series monitors offer Dark Boost feature which increases visibility in the dark scenes of video games. You can also save custom gaming profiles with optimal picture settings parameters or use the pre-calibrated modes for different genres. The OSD menu also offers plenty of settings including color temperature, gamma, 6-axis color adjustment, etc. 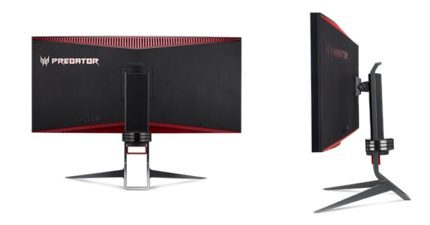 Te Acer Predator Z35P VA monitor features the distinguishable Predator design which consists of a matte black cabinet, dark-gray stand, and aluminum finish at the back along with some logotype red parts. However, unlike the other Predator big ultra-wide monitors such as the Acer Predator X34, this model doesn’t feature the ambient lighting gimmick. The bezel is a bit thicker than most modern monitors tend to offer, but given the screen size, it’s also less noticeable. At the top and the sides, the bezel is around 14mm thick while the bottom bezel amounts to 24mm.

The monitor offers plenty of ergonomic abilities including VESA mount with 100 x 100mm pattern, -4, 35 degrees tilt, 20 degrees swivel to the left and right, and up to 130 mm height adjustment. The connector ports include an HDMI 1.4, a DisplayPort 1.2, and four USB 3.0 ports. There are also 2x9W built-in speakers which is a welcome change to the usual 2x2W speakers that we usually see.

The Acer Predator Z35P price amounts to $1100 at the moment (May 2017). As previously mentioned, it’s already available for purchase in some parts of Canada and Europe. As we are eagerly anticipating to try this monitor, Acer hints that the Acer Predator Z35P release date in the US should be sometime by the end of the month.

The $1110 price tag is actually less than expected for a fascinating display as this one, especially after considering its gigantic size, high-contrast VA panel, stellar resolution, G-Sync, and the unprecedented 120Hz refresh rate for a monitor of this caliber. In fact, the Omen X 35 offers nearly identical features but maxes out at 100Hz, yet it is priced at a little over $1,150 at the moment – which is certain to drop after the Acer Predator Z35P release date; If it wishes to stay relevant, that is.

The other alternative to the Acer Predator Z35P G-Sync monitor would be the AOC Agon AG352UCG priced at $900. It features almost the same performance and features as the Omen X 35 including the 3440×1440 resolution, G-Sync, 35-inch VA curved panel, and 100Hz; it just doesn’t look as nice.