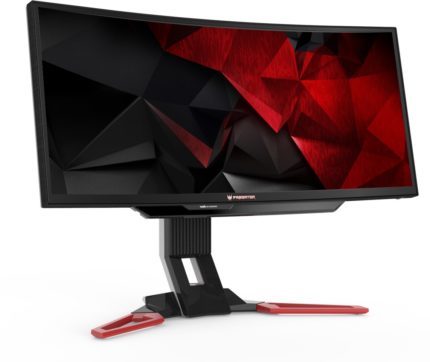 Acer has announced a plenty of awesome gaming monitors for us from the Predator series at the CES 2017, most of which will be already available in February. The Acer Predator Z301CT is a 30-inch curved gaming monitor which features a new and exciting Tobii eye tracking technology. In fact, this feature has earned Asus the “Best of Innovation” award at the CES.

The Asus Predator Z301CT promises us a previously unimaginable gaming experience thanks to its stunning 200Hz rate and the exclusive Tobii eye tracking technology. Supposedly, this feature will allow gamers to aim and target more easily and quickly thanks to the built-in camera which will rotate angles and focus according to your eye movement providing you with a more realistic gaming experience in compatible games. If it’s any bit as good as it sounds, this feature will along the curved screen of 1800R and 200Hz offer the most immersive gaming experience yet.

This amazing gaming monitor will also feature the Nvidia G-Sync technology for the improved and smoother performance in video games. By connecting your compatible Nvidia graphics card through the DisplayPort and enabling the G-Sync, you’ll gain a more steady frame rate without any screen stuttering, tearing, and lagging. This is made possible as the frame rate between your graphics card’s GPU and the monitor will be synchronized, thus the more stable FPS rate.

The Asus Predator Z301CT will have a VA (Vertical Alignment) panel. This means better contrast ratio of 3,000:1 that provides more detailed black levels. Additionally, the VA panel offers the impeccable viewing angles of 178 degrees both horizontal and vertical, allowing you and everyone else in the room to enjoy a flawless picture that won’t lose colors when viewed from different angles. The 8-bit VA panel will also cover 100% of the sRGB color spaces providing consistent and vibrant colors sufficient for medium level professional designers.

So far, the only major drawback of the VA panels, when it comes to gaming at least, was considered to be the slow response time. In this case, the response time of 4ms is as good as any IPS panel is capable of delivering. The only thing that remains to be checked is the actual input lag and whether it will be acceptable for semi-professional competitive gaming. Nevertheless, the response time of 4ms is surprisingly good for a VA panel and will provide the image without ghosting and blurring of fast-moving objects

The whopping 200Hz rate will ensure fluid, smooth, and responsive gameplay even with the most demanding games. The high Hz rate is to be thanked for the quality image production without screen tearing, motion blurring, as well as improved input lag. In combination with the G-Sync technology, the gaming performance of the Asus Predator Z301CT will be as good as it can get.

The Asus Predator Z301CT will also include the standard gaming features of the Predator series, including the turbo key, dark boost, aim point, and the GameView. The turbo key allows the users to quickly swap between different Hz rates using one of the monitor’s hotkeys. Another hotkey is responsible for the ability to effortlessly swap between three customizable gaming presets.

In these gaming presets you can adjust your preferred standard settings, as well as the level of the dark boost feature which helps brighten and sharpen objects in the very dark scenes in video games. Lastly, the aim point feature allows you to fix a custom crosshair in the middle of your screen which is of great help in FPS games, however, some consider it as cheating!

The Asus Predator Z301CT also involves the standard eye protective features, such as the blue-light filter and the ComfyView anti-glare protection. With all these components along the flicker-less screen, you’ll be able to endure the longest gaming sessions without straining your eyes. 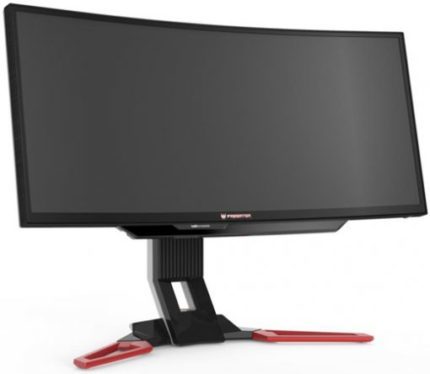 The Acer Predator Z301CT features its common modern design which clearly indicates that it’s meant for the gamers. The thin bezel along with the curved screen simply can’t look bad. As always, the gaming-inspired ergonomics provide the 30 degrees tilt ability, 4.7-inch height adjustment, and 25 degrees swivel ability to the left and right. This gaming monitor will also have the 100mm x 100m VESA mount compliance if you choose to safely and securely hang it on a wall or a mounting arm.

The display inputs include the HDMI 1.4 port and the DisplayPort 1.2a for the Nvidia G-Sync feature. Besides these, the Acer Predator Z301CT will also feature five USB3.0 ports allowing the gamers to easily connect their keyboard, mouse, or controller devices to the monitor as well as to charge their mobile phones. Additionally, the audio line-out port will also be available for the headphones.

The price of the Acer Predator Z301CT will amount to $900 once it’s released in February. It’s needless to say that such price is very compelling considering the monitor’s specifications and the Tobii eye tracking feature. The only thing that might deprive users of this gaming monitor is paying $900 for a rather poor 2560×1080 resolution for the price. However, the enthralling eye tracking feature might just make up for it, we’ll just have to wait and see how it actually performs in action.

The Acer Predator Z301CT will certainly surpass the gaming experience as we know it. Moreover, the price tag for it seems pretty reasonable. In combination with the common Asus Predator series’ gaming features and the exclusive eye tracking technology, this awesome gaming monitor will surely appeal to a wide range of the gamers, especially to FPS fanatics.

The Acer Predator Z301CT will offer the groundbreaking Tobii eye tracking experience for FPS gamers which earned Asus the Best of Innovation award. Along with the 200Hz rate, Nvidia G-Sync, and the standard Predator gaming features, this gaming monitor will easily impress you.