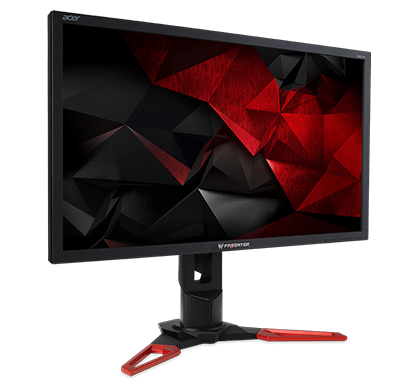 The Acer XB321HK would hardly be anyone’s idea of an inexpensive monitor for gamers. It is however a huge example of the latest 4K display technologies as it is designed to meet almost all the needs of gamers in its essential specifications. This Predator has a mainly minimalist and modest shape but it also presents some flashy bits of style. The gaming-oriented look of its supporting base would be especially appreciated by many gamers.

But what really makes a 4K display worthy isn’t found in its exterior as it is the functional operation and execution which is crucial. The XB1 performs outstandingly in these by most measures for it delivers a high level of build, connectivity, and high-grade performance which would satisfy most dedicated PC gamers who rare to play at 4k resolutions. With its G-Sync implementation and the engaging presence of its large 32-inch screen, the XB1’s few shortcomings hardly dispel its advantages, although this model is certainly among the more expensive UHD monitors in its class.

Firstly, we appreciate the monitor’s external styling. It’s good-looking from all angles and has an amazingly slim structure given its size. The power switch and numerous easy-to-use controls are found at the lower right-hand corner of the display. The invitingly slim bezel is understated and minimizes wasted space, while the matte black finish which covers almost the entire frame helps to minimize distractions when in use. The cool-looking mounting arm of the XB321HK is supported by a reddish base which offers enough flexibility to adapt the screen to various heights and tilting angles. The additional rubber padding beneath the monitor’s base also provided for a more stable footing, which we appreciated. The padding also reduces the likelihood of the desk’s surface being abraded or scuffed whenever the display is moved around.

This model has enough connections to please all but the most hardcore users. The number of HDMI and DisplayPort connections is sufficient for meeting every basic requirement to successfully play 4K games at various frame rates. The monitor also features outstanding USB connectivity compared to similar UHD models available in the market.

One vital aspect which most users would value quite highly would be the screen’s visual quality at 4K resolution. In this the XB1 doesn’t disappoint as it showcases brilliant levels of display performances in all key measures, offering deep yet lively colors with excellent contrast on its sharp and clear display. Its implementation of in-plane switching (IPS) display technology enables superior brightness and a wider viewing angle.

If users aren’t pleased with the unit’s out-of-box functionality, they can readily access the monitor’s easy-to-use controls via on-screen function menus and keys in order to fine-tuning picture settings. Useful modes such as those for Game and Refresh-rate overclocks can also be initiated. Aside from premium features such as a blue-light filter and dark-level boost, the monitor even offers an assisted-aiming mode which superimposes crosshairs on the screen’s center for enhanced FPS gameplay.

The fact that the XB321HK integrates G-Sync adaptive refresh rate technologies from NVidia already provides it with a sizeable increase in graphical performance. Users who have discrete or integrated NVIDIA GPUs installed can have their cards and displays readily match refresh rates. It allows the kind of flowing play free of tears or stutters which a good UHD 4K system can deliver together with this advance. The G-Sync capability of this monitor at 60Hz and various refresh rates will allow users to experience the richest 4K-level visual quality with much fewer issues than may be found in rival monitors lacking GPU-display syncing.

To begin with, the number of display and USB connections could have been more complete. One improvement could have been the addition of one or more HDMI 2.0 ports to extend its 4K graphical options, as the 1.4 spec can deliver at most 30 fps streams between GPUs and 4K monitors. While the XB321HK can handle such situations reasonably well due to its qualitative advantages as well as its compliance with G-Sync standards, any 4K gaming experiences at 60 fps will only be possible when using the one DisplayPort connection found on the monitor. The other potential improvement also involves maximizing options in that Acer’s designers should have incorporated one or several more of both port types. Extra HDMI and DisplayPort connections are always welcomed by diehard users, particularly those running multiple displays.

It should be mentioned that there are a number of high-level issues to consider when evaluating this model’s functional merits. One is that while IPS panels normally offer a good viewing angle and accurate colors, they can also suffer from bleed in their backlighting, particularly at screen edge of certain models where the fault usually occurs to an extent. Display contrast is affected to a degree and the resulting black level may not be as good as that found on a competitive 4K model featuring a VA or TN panel.

There are other notable issues which are useful to follow. One thing to remember is that this monitor’s G-Sync feature only interoperates with that of a recent NVidia card like a GTX1080 or 1070. Thus, if you are running one of Nvidia’s newest series of discrete graphics adapters, the XB321HK would be a great pick for hardcore UHD games to play smoothly on at 4K resolutions.

That said, if you are set on using AMD’s GPUs for intensive PC gaming then it makes more sense to select a FreeSync-compatible monitor with HDMI 2.0 ports, as NVidia’s G-Sync tech isn’t compatible with AMD graphics cards. Another thing to consider is the high price of the XB321HK relative to other 4K options. Monitors like this which feature IPS panels are usually pricier than models using other display technologies. We understand that any new 32-inch UHD display will usually command a premium. But this model comes with a rather high price even though it does offer great build and style and outstanding 4K performance.

We generally like Acer’s XB1 for its outstandingly bright, colorful, and vibrant screen. These qualities combine in its impressively huge screen to arrive at an almost ideal 4K display for hardcore gaming, particularly for PCs with the latest NVidia GPUs. It could be priced lower, but then it could have performed lower as well. It does deliver a most satisfying 4K gaming experience for the price.

NVIDIA’s G-Sync adaptive refresh technologies enable high-performance 4K gaming with compatible G-Sync monitors. This improvement was certainly noticeable when playing graphics-intensive games on the Acer XB1. We enjoyed great 4K gameplay at 60 fps with less graphically-intensive titles and with the level of details lowered. Enabling ultra high settings in graphics-heavy titles can be very demanding on GPUs due to their operational limits. Of note was the lively gaming experience at Full HD resolutions, with refresh cycles near the highest possible frame rate of 60Hz. And yet with 4k gameplay at no more than 30 fps due to HDMI 1.4 limitations, the resulting experience was smooth and not noticeably affected by tearing or stutters as a result of NVidia’s adaptive refresh technology. This is a key advantage of this model which any hardcore user should consider for 4k gaming.

In addition to its adaptive refresh rates, the XB321HK meets the requirements of 4K gaming in its major screen and internal specifications. The biggest selling point is that the 32-inch display can involve gamers in much more engaging experiences than smaller 24-, 27-, or even 28-inch models. The spaciousness of the big display can make a real difference while playing, and the exceptionally slim bezels further boost the impression of a large expanse of screen. Aside from the advantage of size, Acer’s XB1 also features sub-5 ms response times, excellent pixel pitch, a host of connections, and a screen which offers exceptional brightness levels, all which better enable it to render more details in graphics-heavy scenes. The panel’s native contrast may not be that remarkable, but this issue is somewhat compensated by its exceptional range of brightness levels.

Acer’s XB1 monitor features a rather lofty set of specifications in general, and it delivers compelling results in color- and detail-intensive gaming titles, particularly in new games rich with 4k graphics.

The first thing to consider is that this monitor offers a remarkably vibrant screen with a maximum brightness of 350cd/m². Tonal quality in brightly-lit scenes and with explosion and other dynamic effects is rendered very nicely. Secondly, its increased brightness level does a lot to make up for the regular native contrast ratio of 1000:1 or less. We mentioned that the XB1’s IPS panel manifests some backlighting bleed at the screen edge. Although this can annoy viewers watching mostly darkened scenes, the problem is hardly noticeable while playing or when viewing pictures or videos in which not all graphical elements are very dark. This Acer’s IPS panel also offers a remarkable viewing angle from the vantage of almost any frontal position, for it displays respectable contrasts and color accuracies at up to 178-degree angles.

Acer also boasts of its support for 10-bit color, and hopefully this is being done correctly given its high price. On the question of whether this is a model with 10-bit-depth that can really display all 1.07 billion colors, we can state that the XB1 has a superior sRGB coverage of close to 100% and that it smoothly renders onscreen color gradations across a dissimilar range of comparable values. The XB1 generally presents very vibrant and colorful game and media scenes with great quality. 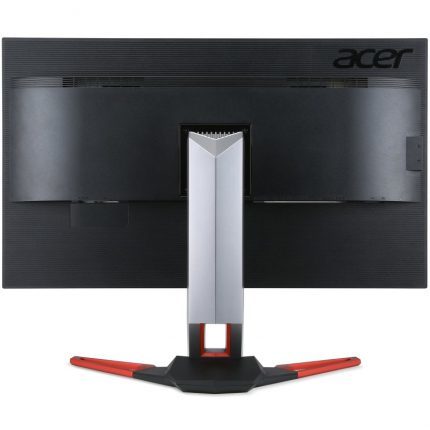 Acer’s XB321HK 4K display currently sells for upwards of $1300 at big online sellers like Amazon. This is definitely not an inexpensive 4K UHD gamer’s display, as we noted. There is a much more budget-friendly 27-inch model, the XB271HK, which sells for around $800 online.

When summing up what we don’t like about this premium model, we have to disagree with Acer’s decision to include just one HDMI and one DisplayPort connector. We also do not care for the backlight bleeds at the edges of its IPS screen. Other than that, some feel that the absence of a swiveling mechanism in the supporting base can be irritating. Acer’s XB1 is also rather pricey compared to its rivals, as several name-brand 4K HDTVs with larger screens offer more features at lower cost.

Given its few faults, Acer’s Predator XB1 is still an outstandingly designed 4K gaming monitor with the features and performance to please most everyone. Its expansive screen size and G-Sync adaptive refresh technology are particularly welcome features. That said, this model is somewhat high-priced for a UHD display. For those ready to pay this much for a 4k gaming monitor, it might make sense to look at less pricey 4K-ready HDTVs with more features.