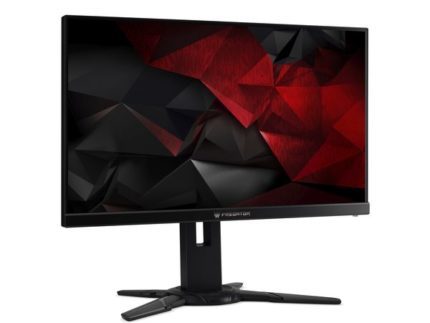 The Acer Predator XB272 PC monitor will have all the common features of the Predator series gaming monitors. Firstly, the GameView feature allows its users to create three different customizable gaming profiles. These profiles can have manually adjusted settings which can be edited and saved at will. With just one OSD button hotkey, you will be able to quickly swap between these profiles to fit the different genres of games.

Secondly, the black boost feature brightens and sharpens the dark objects in the darkened areas of video games. With this feature, you gain a more visible and clear display without the picture quality being affected. This is especially useful in FPS games and overall dark themed games such as the Diablo 3. The aim-point feature is great for FPS gamers as with it, you can set a custom crosshair overlay which will improve your aim and give you the edge over your opponents.

The Acer EyeProtect feature takes care of your eyesight as the screen is flicker-less and contains the harmful blue light filter. So, you can play for hours without feeling eye fatigue. Moreover, the screen is coated with a matte, anti-glare finish which gets rid of the reflection for good.

The Nvidia G-Sync allows synchronization between your compatible Nvidia graphics card and the refresh rate of the Acer Predator XB272 1080p display. Once you enable the G-Sync feature you will gain a more steady frame rate and a screen without stuttering and tearing. You should always have this feature on unless you encounter motion blur. Then you can enable the Ultra Low Motion Blur instead. These two features cannot be activated at the same time, so you should choose accordingly. While the ULMB feature reduces motion blur and ghosting, it won’t eliminate screen tearing like the G-Sync does – and vice versa.

You should keep in mind that if you wish to use the ULMB feature you can only set your monitor Hz rate to either 85Hz, 100Hz, or 120Hz. The native 240Hz rate of the monitor should eliminate motion blurring and ghosting on its own, depending on your computer setup and the game you’re playing, of course. There is no doubt, however, that with all these features, you’ll be able to adjust perfect settings for smooth and fluid gameplay.

The obvious panel choice for a competitive gaming monitor is the TN. It’s the only panel capable of delivering the rapid response time of only 1ms which is mandatory for the high-end competitive gaming sessions. The drawbacks of TN panels, however, include issues with viewing angles and lesser quality colors. Still, the Acer Predator XB272 G-Sync monitor will cover 100% of the sRGB color spaces which amounts to a total of 72% of the NTSC colors space.

The design of the Acer Predator XB272 240Hz display resembles the other Predator series monitors with a modern and gaming-inspired appearance. The versatile stand is capable of adjusting the height of the monitor for 115 millimeters, swiveling it to the left and right by 45 degrees, and it can pivot by 90 degrees into the portrait position. Lastly, the screen can be tilted by 25 degrees.

The base of the monitor is easily detachable so that it can easily be VESA mounted if desired. The ZeroFrame design is ideal for multi-display setups as it would leave only a tiny gap between multiple monitors.

The Acer Predator XB272 monitor includes an HDMI 1.4 and the DisplayPort 1.2 for the Nvidia G-Sync technology. In addition, there will also be four downstream USB3.0 ports at the side of the monitor which can be used for the easy connection of your keyboard, mouse, and controller devices. There will also be an audio line-out port for the headphones or external speakers. The built-in speakers feature two 2W speakers for basic sound production.

The price of the Acer Predator XB272 TN monitor costs 700 GDP and will likely cost 700 USD as well, when it gets released in the United States. Considering that its 25-inch version costs $550 and has all the same features as the XB272 makes us think that there is something Acer is still not telling us about the Acer Predator XB272. It doesn’t seem right to pay extra $130 for just a 2-inch bigger screen, especially when the 1080p resolution looks better on a 25-inch than on a 27-inch due to higher pixel density which means more details.

The Acer Predator XB272 will offer a smooth and fluid gameplay experience with its stunning 240Hz rate, rapid 1ms response time, and Nvidia G-Sync and Ultra Low Motion Blur features. Professional gamers will have all the tools that their need for the high-end competitive gaming sessions. For now, the Acer Predator XB272 display seems to have the same specifications as its 25-inch version which makes the $130 price difference questionable, so we’ll have to wait and see what happens.

The Acer Predator XB272 will deliver a stunning 240Hz rate with the rapid 1ms response time which will leave professional gamers with no excuses for losing anymore. Along with the Nvidia G-Sync technology and Predator series gaming features the smooth performance is assured.