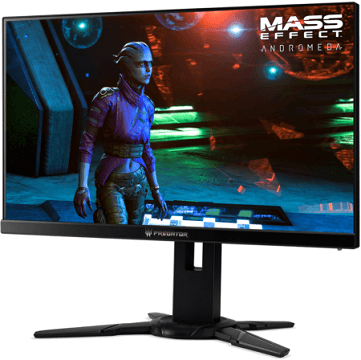 Update: The Acer Predator XB272-HDR and the rest of the 4K 144Hz gaming monitors should be released by the end of April, according to NVIDIA.

Definitely, the most exciting gaming monitors announced at the CES 2017 were the Acer Predator XB272-HDR and the ASUS ROG Swift PG27UQ. Nvidia teamed up with AU Optronics in order to create the very first 144Hz monitors with 4K resolution.

Furthermore, both the Acer XB272-HDR and the ASUS PG27UQ will feature the Nvidia G-SYNC technology which will work with HDR (High Dynamic Range). Both of these 144Hz 4K gaming monitors will be released sometime in the third quarter of 2018. Until then, we’ll share the jaw-dropping specifications we know so far.

The Acer Predator XB272-HDR will feature the 4K resolution on a 27-inch screen which will along the HDR10 compatibility make video games overflow with rich details resulting in a flawless picture quality.

Even the most powerful graphics cards today, such as the Nvidia GTX 1080 Ti, are only strong enough to push the 4K resolution just a bit over 60Hz, so in order to actually see this monitor in 144Hz action, we’ll have to wait for new graphics cards to be released.

Moreover, we’ll also have to wait for more HDR ready video games to be released as well. One of such games is the Mass Effect: Andromeda which will support the HDR10 and should be released sometime before the Acer Predator XB272-HDR.

The quantum-dot technology of the Acer Predator XB272-HDR will provide its users with the wider color gamut and enhanced color palette. The actual information regarding the DCI-P3 color gamut is unknown, although it is definitely going to cover over 90% of the color space.

Nvidia promises to completely eliminate input lag from the HDR gaming with its G-SYNC HDR technology which allows for synchronized refresh rates between the monitor and the graphics card, in turn, eliminating screen tearing and stuttering.

The 144Hz rate will be plenty to drastically reduce motion blurring of fast-moving objects even at the 4K resolution. The response time speed is still unknown, although we supposed it won’t be faster than 4ms gray to gray due to the limitations of the IPS panel.

AU Optronics’ AHVA IPS panel of the Acer Predator XB272-HDR delivers the impeccable viewing angles of 178 degrees at all directions, allowing you to enjoy precise, consistent, and vibrant colors no matter at what angle or distance you’re looking at the screen.

We suppose that the Acer Predator XB272-HDR will also feature the standard gaming features as the other Predator series monitors. Such as the aim-point which allows FPS players to add a custom crosshair overlay on their screen, the GameView customizable gaming profiles, and the black boost feature which improves the visibility in dark areas of video games.

The Acer Predator XB272-HDR will feature the classical Predator style design with ZeroFrame thin bezels and versatile ergonomic functionalities. In fact, it features the same design as its non-HDR version monitor – the XB272 240Hz gaming monitor.

This means that you will be able to height adjust the monitor up to 115 millimeters, tilt it by 25 degrees, swivel it to the left and right by 45 degrees, and pivot it by 90 degrees into the portrait position. The monitor is also going to be VESA mount compatible.

As far as the connectivity is concerned, we know that the monitor will feature two DisplayPorts 1.4 for the 4K resolution at 144Hz and there will likely be an extra HDMI port and a USB hub.

However, none of this information is official, so we can only wait until the third quarter of 2018 and see. Acer will also offer the same 4K 144Hz G-SYNC HDR model with the integrated Tobii eye-tracking technology, the Acer Predator X27.

The Acer Predator XB272-HDR will certainly change the way video games will be played. As one of the first monitors to feature a 4K resolution with 144Hz, games will not only look amazing but run buttery smooth as well.

With the introduction of the G-SYNC HDR, we’ll be able to experience the HDR content in video games with intense colors and contrast like never before while the G-SYNC takes care of the performance. In time, there will most likely be a version of the monitor with the FreeSync 2 technology for the AMD graphics card users; so that everyone can take their gaming to the next level.

The Acer Predator XB272-HDR is one of the first monitors to revolutionize the gaming experience by offering 144Hz at 4K resolution in addition to providing Nvidia G-SYNC and true HDR 10 support via 384-zone local dimming, true 10-bit color support, and 1,000-nit peak brightness.