Apple’s Thunderbolt Monitor Might Include Its Own Graphics Card 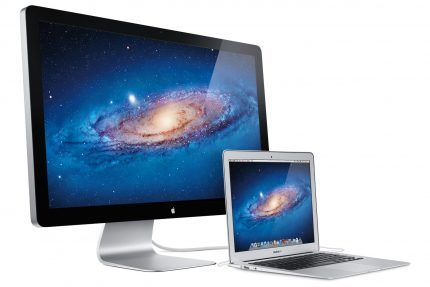 The current Apple Thunderbolt is currently being sold for $999 and it has now been 5 years since it first saw it’s way to the stores. The resolution is only WQHD and for that price tag, you can get a high-quality 4K monitor for even less. It’s time for an upgrade and we have now got confirmation that the stock on the Thunderbolt display are running out and there are no indication that they will be restocked.

We have now received word that the new Apple Thunderbolt display will feature its own graphics card inside of it. Yes, that’s right, this monitor will have its own GPU and it will use Thunderbolt 3, which uses a USB-C connector, to connect the Display and the graphics chip. It is said to be very similar to the current-gen 5K iMac that you can buy right now. This new monitor will allow lesser powerful Macs to use the display, so if the onboard graphics aren’t good enough for a certain task, the Mac will automatically switch to the iMac’s graphics chipset.

The idea behind this new and exciting innovation is that Apple focuses on making their Macs and Macbooks as small as possible, they cannot have a powerful GPU by nature. Therefore, they wish to incorporate this part directly to the Thunderbolt display themselves, so that Apple can keep releasing light and thin MacBooks, Mac Pros and MacBook Pros to the public while the devices can still use a 5K display because of the embedded GPU. It is not certain if the integrated GPU will offer additional power for applications or that it is only meant to drive the display, like Intel integrated GPU’s in a lot of Intel CPU’s.

There is no release date for this specific new Thunderbolt monitor as of yet, but there are many enthusiasts that are very excited about this new upcoming computer screen. Mac Pro users have been complaining for years to Apple about wanting a higher resolution Apple display for years now and it seems like their prayers have now been answered. They no longer have to consider switching to an iMac to make the upgrade to a 5K resolution. We expect that Apple will make an announcement of the upcoming Thunderbolt display at the Worldwide Developers Conference in mid-June 2016.