By Alex ChristensenSeptember 29, 2016 No Comments 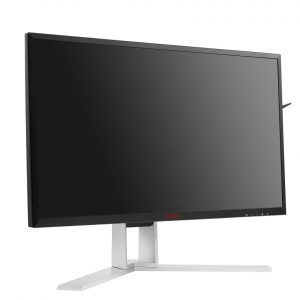 The AOC AGON AG271QX was first revealed in April earlier this year, but it has just now begun shipping out units to customers. The 27-inch gaming monitor is considered high-end due to the great performance it delivers and can be bought for a reasonable price at $499 USD, which is actually $100 cheaper than planned. This is probably due to the fact that the competing model from ASUS, the MG278Q is for sale at around $500 so AOC probably wanted it to compete with it.

The panel type of the AOC AG271QX is TN (Twisted Nematic), which means that the viewing angles will be bad and it will have bad color accuracy. Brightness is specified to  be 350 cd/m2 and the contrast ratio is 1000:1. Connection options include VGA, Dual-link DVI, HDMI and Displayport. Furthermore, you will find two USB 2.0 ports and three USB 3.0 ports in the back. There are also integrated stereo speakers in this model.

Since this great gaming monitor features a TN panel, most people who prefer color accuracy over response time will not like it. AOC has already addressed this and has released IPS model as well, which will feature the usual 4ms response time, but in turn will deliver far superior colors, a 165Hz refresh rate and support for NVIDIA G-SYNC. It’s called the AOC AG271QG and it’s a great gaming monitor as well. The price tag of the AOC AG271QG will be $799, which is a lot more than this computer display.

Below is a table that summarizes the most important specs mentioned about the AOC AGON AG271QX gaming monitor.