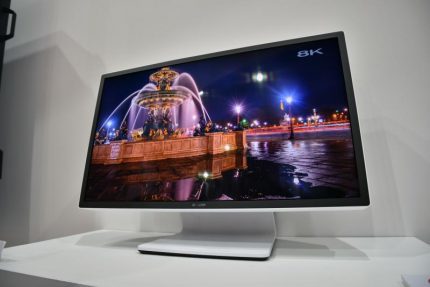 The company Sharp has unveiled a new monitor, which sets a milestone in monitor production. This product showcase happened during CEATEC 2016 in Japan (Combined Exhibition of Advanced Technologies), This unveil is very special due to the incredible monitor that was shown – a 27-inch monitor with 8K resolution. You may have heard of the 80-inch (and above) monitor with 8K resolution already, but Sharp sets a new milestone by adopting the 8K resolution (also called 8K UHD), which hs 7680 x 4320 pixels. This resolution offers four times as many pixels as 4K resolution, which itself is great to look at, and sixteen times the amount of pixels in Full HD resolution. The PPI is therefore an incredible 326 PPI, which is exactly the same as an iPhone 7 (and other iPhones, excluding the larger Plus models).

Other notable specs include a 120Hz refresh rate, which is insane considering the amount of data that needs to be transferred each second. DisplayPort 1.4 supports 8K, but only at a maximum refresh rate of 60Hz using Display Stream Compression (DSC). You will need eight DisplayPort 1.4 ports to fully utilize 8K120 with HDR (High Dynamic Range), which is also supported by the Sharp IGZO monitor and it offers a 1000 cd/m2 brightness.

IGZO is a transistor type used in the display’s TFT backplane. This is what controls the display panel, it can be any panel type, such as TN, IPS and OLED as well. The semiconductor that is being used is Indium-Gallium-Zinc-Oxide instead of Silicon. There’s no real difference between a Si-TFT IPS display and an IGZO-TFT IPS display, the IGZO term will just save power, especially on mobile devices with high PPI displays.

8K30 is currently supported by current-gen GPU’s since the AMD RX 400 and GTX 1000 series has DisplayPort 1.3, but the cards are ready for DisplayPort 1.4, since it is just a data compression change.

The Japanese company Sharp was acquired by Foxconn previously in 2016 for $3.5 billion. Sharp is also looking to get into manufacturing OLED panels for smartphones sometime in the next year. This is being accelerated thanks fo Foxconn investing 200 billion Yen in the company.

So what do you think about the Sharp IGZO monitor? Let us know in the comments what you think the price will be for such an incredible display. An overview of the monitor can be seen in the table below.