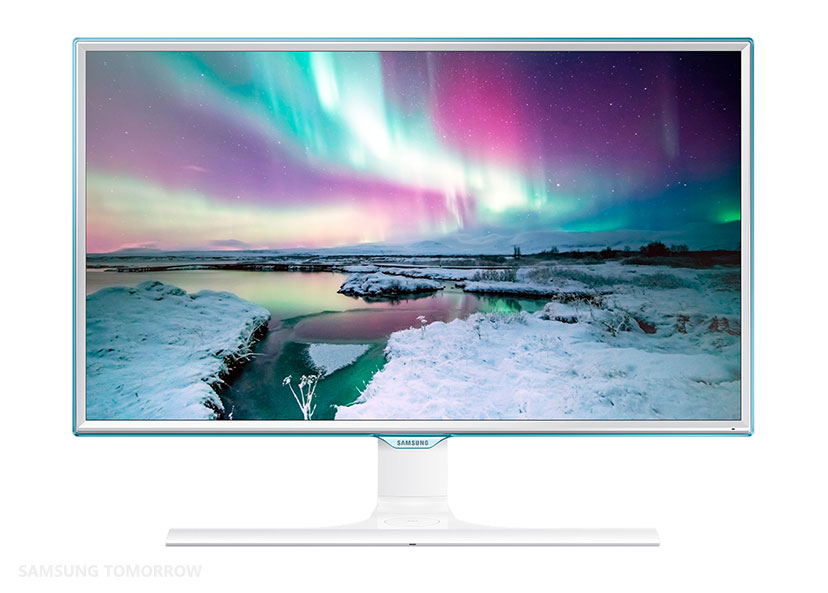 Update: This product is now available for pre-order at Newegg for $249.99 and will be released in November 13, 2015. It’s also been a year and we’ve now reviewed the Samsung S24E370DL display.

The monitors aim to cut down on your cords, wires and everything else that just clutters up your space and looks messy. It has a modern white design and it supports both PC and Mac. The charging station at the base of the monitor is based on the Qi wireless charging technology. Besides the two mobile devices already mentioned, there’s a range of other Android devices that support wireless charging. iPhones are the exception, but maybe we will see Apple introducing wireless charging with the iPhone 7, who knows.

The display itself has a PLS panel, which is just Samsung’s version of the IPS-panel, which LG owns all trademarks of. It will give you very good viewing angles and color reproduction. Other than that, it has a standard 1920×1080 resolution (Full HD), which is fine considering it’s only 23.6-inches. The 1000:1 contrast ratio is also pretty standard for IPS-type panels (PLS included), but the 4ms response time is very good and is only something you will find in newer IPS-panel based monitors. The panel is also gently coated with a glossy layer and has 178/178 viewing angles.

One of the most exciting things about this monitor is the AMD FreeSync support, which gamers are really into right now. It will synchronize your monitor’s refresh rate with the FPS that your GPU renders at real-time, effectively eliminating screen tearing without the cost of any performance at all, unlike V-SYNC. It also removes stuttering effects. Now combine this with the low 4ms response time and you will get a clear and smooth viewing experience. The Eye Saver Mode and the flicker-free technology in this monitor will also prevent eye strain issues, so that information might come in handy if you were sensitive to such matters. The 60Hz refresh rate is a major drawback and they really should make a 144Hz model if they truly want a solid gaming monitor.

Samsung has not revealed anything about speakers in this monitor, so we suppose it doesn’t have them, but we will update when we find out. Connection options include one HDMI 1.4 port, one DisplayPort 1.2 port and one D-SUB (VGA) port.

You can see a video made by Samsung that presents the monitor below.

Pricing details and release date are confirmed. This monitor will cost you $249.99 and you can pre-order it already at Newegg. It will be available on November 13, 2015.