By Alex ChristensenApril 25, 2018 No Comments

Samsung is preparing yet another “super ultrawide” display for the market. The new Samsung C49J89 is very similar to the Samsung C49HG90 as both monitors feature the enormous 49-inch screen with 32:9 aspect ratio and 3840×1080 screen resolution.

However, in comparison to the C49HG90 model, the Samsung C49J89 will leave you without AMD FreeSync, DisplayHDR 600, the 1ms MPRT backlight strobing technology, nor quantum dots.

Therefore, we expect it to be a more affordable super ultrawide monitor for business purposes, home entertainment, and finally, gaming due to the 144Hz refresh rate.

Based on a VA panel with 3,000:1 static contrast ratio, 178-degree viewing angles, 5ms response time speed, and true 8-bit color support, the Samsung C49J89 display will still manage to deliver an immersive image quality even without the extended color gamut the C49HG90 boasts.

As the monitor is huge and curved by 1800R, you will be able to sit a bit further from it which would make the low pixel density less apparent. In fact, it’s not a big deal for gaming but for professional and productive purposes we feel you’d much better off with a dual 27-inch 1440p setup or a regular 34-inch 3440×1440 ultrawide monitor.

Unlike the Samsung C49HG90, the Samsung C49J89 features a built-in KVM switch which allows you to control two different PCs connected to the monitor with just one set of mouse and keyboard.

Furthermore, there are Picture in Picture and Picture by Picture modes available as well.

The screen is flicker-free which in addition to the Eye Saver mode with a low blue light filter allow you to work or game for hours to an end without eye fatigue. 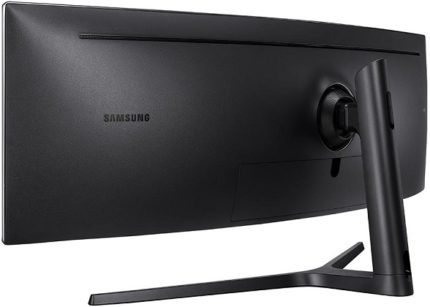 The design is pretty much identical to the Samsung C49HG90 with decent ergonomic support including -5/15 degrees tilt, 120mm height adjustment, and slightly swivel to the left and right by 15 degrees. There are also 100 x 100 holes for the VESA mount.

Moving on to the connectivity, there are two USB type C ports which allow for simultaneous data, audio, and video transfer as well as power charging using only one cable. Other display connectors include a DisplayPort 1.2 and an HDMI 2.0. Additionally, there’s a dual USB3.0 hub, the headphones jack, and a line-in for the 2x7W speakers.

The Samsung C49J89 monitor has no blue LEDs for ambient lighting like the C49HG90 model does.

The release date and pricing of the Samsung C49J89 144Hz monitor isn’t yet revealed, but we expect it to be considerably less expensive than the Samsung C49HG90.

While the Samsung C49J89 monitor lacks a lot of features that make the C49HG90 model amazing, it will still provide you with the same seamless immersion. If you’ve had your eyes set on the Samsung C49HG90 but the price has kept you away, perhaps the newer model will be an acceptable alternative to your budget.