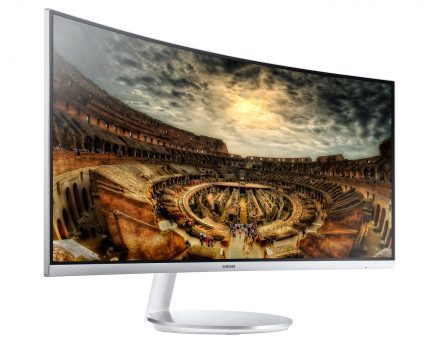 Samsung has announced the Samsung C34F791 monitor, also known as CF791, C34F791W and C34F791WD. Years ago, they released the Samsung S34E790C, which was also a 34-inch UltraWide VA monitor. The major difference between these monitors is that this Samsung VA monitor features a 100Hz refresh rate, whereas the Samsung S34E790C can only support up to 60Hz at a resolution of 3440 x 1440. This will make this monitor great for gaming as well, as some gamers prefer the VA panel over the IPS panels that most other UltraWide monitors feature.

The Samsung C34F791 gaming monitor also features a native resolution of 3440 x 1440. Furthermore, the curvature on this model is greater as well with a curvature value of 1500R, which is pretty steep. The top bezel and side bezel are also all very slim and combined with the circular monitor stand and the silver colors, you end up with a very modern and sleek PC display. This will certainly look well on your desk and does not look like a gaming monitor at all. Looking at other specs, you will see that the Samsung C34F791 features AMD FreeSync as well. The variable refresh rate range is not confirmed, but we believe it to be 48Hz-100Hz.

Other specs include a 3000:1 static contrast ratio, 178°/178° viewing angles and the screen is coated with a light anti-matte screen coating. This will help preserve the colors, and since this Samsung monitor also features a Quantum Dot backlight, you end up with a very vibrant picture. This essentially means that Quantum Dots will appear instead of the standard backlight phosphors that we are used to, resulting in an enhanced 125% sRGB color gamut. The display is of course also flicker-free and a 4ms response time is specified, which is pretty normal for VA panels produced today.

Features include “Game Mode”, which will enhance visibility in games and an “Eye Saver Mode”, which will protect your eyes against harmful blue rays and thus make it much easier to sleep if you use your monitor just before going to bed. Picture-in-Picture (PiP) and Picture-by-Picture (PbP) are also supported by the Samsung C34F791 monitor.

Connection options include a DisplayPort 1.2a port, which is required for FreeSync, two HDMI ports and two USB 3.0 ports. Furthermore, a 3.5mm headphone jack is found on the backside of the monitor. The OSD can be controlled via a joystick found on the rear right side of the monitor and there’s also dual stereo speakers as well.

The PC screen will be released in early 2017 and will cost you roughly €1200. Stay tuned as we will update this article as we get hold of more information from Samsung.