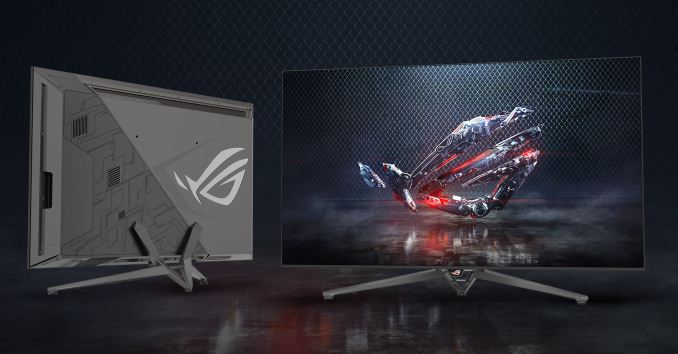 The BFGDs will be available as different models by Acer, ASUS, and HP display manufacturers. These displays can also be used as TVs as they feature Nvidia’s SHIELD Andriod TV functionality for streaming applications such as Netflix, Amazon Video, YouTube, etc.

While the BFGDs won’t feature integrated TV tuners, they come bundled with a remote and a controller as well as built-in Google Assistant voice control feature.

The BFGDs panels are developed by AU Optronics and are basically larger versions of the 4K HDR G-SYNC models which were announced last year, such as the Acer Predator X27 and the ASUS PG27UQ. However, unlike the 27-inch 4K 144Hz monitors, the BFGD will be based on VA panels with quantum-dot technology for superior static contrast ratio and true black colors.

Unlike regular gaming TVs, these machines feature native 120Hz refresh rate without interpolation which will along with Nvidia G-Sync ensure responsive and smooth gaming experience unprecedented at such display size. Although Nvidia reports that the input lag performance of the BFGDs is closer to that of gaming monitors than 4K TVs, no precise information regarding this is yet available.

Besides eliminating screen tearing and stuttering, Nvidia G-Sync technology can also improve movie watching experience by synchronizing video playback to the native frame rate of the film including 23.976, 24, 25, or 48 FPS. Therefore, you’ll be able to enjoy movies the way they were meant to be …watched, just as the movie directors intended.

The Big Format Gaming Displays should be available in Summer 2018 but prices haven’t been revealed yet, though don’t expect them to be below $2,000. Should we come across more information, such as what kind of ports these displays will offer besides the mandatory DisplayPort for G-SYNC, we will update the article – so stay tuned.