By Alex ChristensenAugust 22, 2016 No Comments 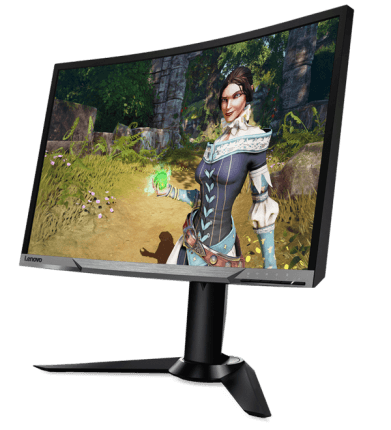 We are seeing more and more of monitors adopting AMD FreeSync instead of NVIDIA G-SYNC due to the easy implementation of FreeSync thanks to it being supported by an open standard. The new Lenovo Y27f is no exception to this and this also happens to be the very first gaming monitor with FreeSync support from Lenovo as well. The already has already released the Lenovo Y27g, which you can tell by the “g” letter suffix, supports NVIDIA G-SYNC instead. Oher than that, the two monitors are very much alike.

The Lenovo Y27f supports a solid 144Hz refresh rate running at the maximum supported native resolution of 1920×1080, also known as FHD or Full HD. With 2016 soon coming to an end, 1080p is simply not a good future-proof resolution now, especially on a 27-inch monitor. A monitor is a type of hardware that you do not often replace. It often takes 4-5 years before monitors are replaced for most people.

Furthermore, the new gaming monitor from Lenovo features a 1800R curve, which will ensure a more immersive gameplay and a deeper gaming experience. The AMD FreeSync support will also ensure that you get a low input lag latency and a very smooth, stutter free gameplay and multimedia experience. It does this by dynamically adjusting the refresh rate of the monitor to the GPU’s rendering of new frames. FreeSync is supported by a wide variety of AMD Radeon graphics cards, including the new Polaris architecture-based AMD Radeon RX series GPU’s.