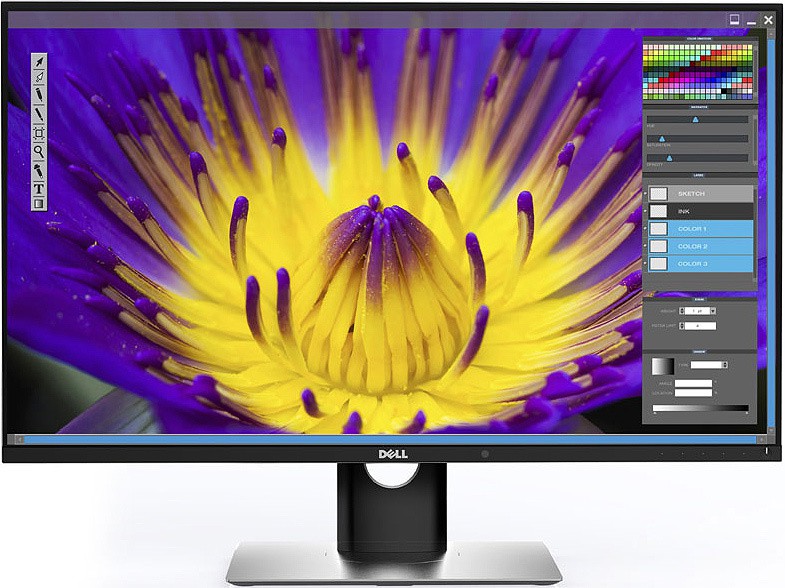 Update: The Dell UP3017Q OLED monitor has been canceled due to image quality problems that could not be resolved. This product will never be released, sadly.

No, that wasn’t a typo. We learned about the Dell UP3017Q (The Dell UP3017QA model includes monitor arm/desk mount) back at CES 2016 and everyone was excited about it. A growing amount of UltraWide curved monitors are hitting the market and gamers love them, but there has been an increasing demand for a new panel technology that has yet to be seen on monitors before – OLED. Dell took notice and paved the way towards OLED monitors with their new UltraSharp model and this awesome OLED monitor is their first product in the line.

Looking purely at the design, you can see that the monitor has slim bezels and pretty much a standard UltraSharp design, but don’t be fooled. It’s the inside that matters, and in this marvelous monitor, you will find a 4K resolution packed in a 30-inch display using OLED panel technology. This produces a response time of nothing less than just 0.1 milliseconds. This is a 40 times faster response times than the high-end IPS panels being produced today!
The UP3017Q also offers a 400.000:1 static contrast ratio, which is very amazing, given that IPS-type monitors normally have 1000:1 static contrast ratios and the best LCD monitors have 4000:1 contrast ratios. OLED doesn’t suffer from IPS glow, also known as backlight bleed, either, so you don’t have to worry about that. Viewing angles of this monitor will also be better than IPS-type monitors, which are usually known for their good viewing angles.

The monitor also offers a 120Hz refresh rate, which is available via DisplayPort over USB-C or Thunderbolt 3 over USB-C. Other connection options that are supported by this monitor are HDMI 2.0 and mDP 1.2, which can be connected on the back as well. The monitor supports 10-bit color with support for 100% Adobe RGB.

The OSD controls are touch sensitive and can be found on the lower right side of the bezel. The power on/off has a white LED indicator as you can see in the image at the top of this article. The stand is fully adjustable with tilt, swivel, height and pivot adjustment options available to you, as well as VESA support (100mm) if you want to mount the monitor on a wall or on a desk mount.

Now here’s the kicker: the MSRP for this monitor is $4999. Yes, the description above might have excited you, but this monitor is no cheap affair. OLED panels are still very expensive to produce, but will hopefully fall down by at least 85% in 5 years when the production scales up and they become cheaper to produce than LCD panels.
The Dell UP3017Q will be released in the end of March 2016.