By Alex ChristensenFebruary 1, 2018 No Comments 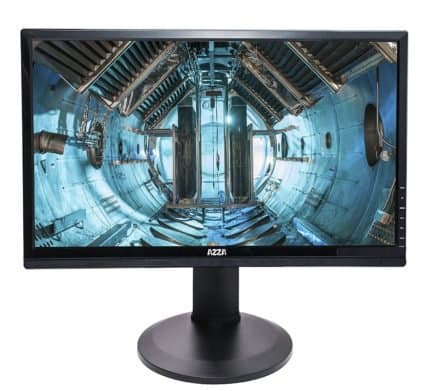 The AZZA MTAZ-24-FS is the first monitor by AZZA, a company mostly known for their gaming PC cases. Right off the bet, the display promises buttery smooth 1080p gameplay with AMD FreeSync, 144Hz refresh rate, and 1ms response time speed.

It also features a fully ergonomic design with what appears to be a durable monitor cabinet and a modern-looking textured finish. Moreover, it’s available for an appealing price.

The AZZA MTAZ-24-FS monitor uses a TN (Twisted Nematic) panel which allows it to deliver the impeccable response time speed of 1ms. The 1ms speed, however, is only achievable by activating the overdrive mode while the typical response time is specified as 3.5ms.

In comparison to the other panel types, the TN is the most affordable but it has certain disadvantages.

First off, it offers an inferior color reproduction, but if you prefer gaming performance over image quality, it’s a toll you need to pay, at least at these prices. The AZZA MTAZ-24-FS still offers a very decent peak brightness of 300 nits and a solid contrast ratio at 1,000:1.

Another flaw of the TN panel is the viewing angles. As opposed to the flawless 178-degree viewing angles, the AZZA MTAZ-24-FS provides 170° horizontal and 160° vertical. But, thanks to its ergonomic functionalities, you will be able to easily match the viewing angles according to your position and enjoy the ultra-fast response time speed unmatched by other panels.

In combination with the rapid 144Hz refresh rate, you can rest assured there will be no ghosting or trailing of the fast moving objects in the competitive FPS games. With no smearing or blurring to get in your way, you’ll have the edge over your opponents.

If you have an AMD graphics card that’s FreeSync compatible, you can synchronize the refresh rate of the AZZA MTAZ-24-FS to the GPU. As a result, screen tearing and stuttering will be entirely eliminated within the dynamic refresh rate range.

The dynamic range amounts to 30-144Hz without any custom tweaking, which is surprisingly good for FreeSync as it usually offers a more narrow range that you have to alter yourself in the drivers.

Note that you can use the monitor with a Nvidia graphics card as well, but you won’t benefit from the dynamic refresh rate.

The AZZA MTAZ-24-FS 144Hz gaming monitor offers full ergonomic support that is usually omitted even in some more expensive monitors. The ergonomics include height adjustment, 90° rotation, tilt, and swivel. The screen coating type is unknown at the moment as well as whether the monitor is VESA mount compatible.

Connector ports are as follows: a DisplayPort 1.2a (for FreeSync and 144Hz), an HDMI and DVI which max out at 120Hz, and a DVI and a VGA (max 75Hz). The monitor also supports dual input so you can make use of its plethora of connectors and view Picture in Picture or Picture by Picture.

The AZZA MTAZ-24-FS price amounts to $241 which is reasonable for its specs and features.

The AOC G2460PF, however, is currently (August 2017) on sale for $200 and features all the same specs including 144Hz, 1ms response time, FreeSync, and even has extra USB ports and built-in speakers.

If you don’t have an AMD graphics card, you may want to consider the Acer GN246HL as a cheaper alternative, or if you’d like to invest more in your monitor, check out the Acer Predator XB241H with Nvidia G-Sync.

AZZA’s first monitor looks quite promising but that may not be enough to draw folk’s attention since there already are gaming monitors with similar specs available for even lesser prices. Or maybe it will, we won’t know until we put it on test ourselves after which we will have a more thorough AZZA MTAZ-24-FS review ready for you as well.