However, the ASUS VG49V won’t feature the quantum-dot technology nor HDR (High Dynamic Range) support for the enhanced color, brightness, and contrast.

Moreover, while the Samsung CHG90 offers the improved second-generation FreeSync 2, ASUS’ model will provide you only with the basic adaptive-sync with a 48-144Hz range.

The Double Full HD resolution of 3840×1080 pixels has an aspect ratio of 32:9 and essentially provides you with the screen real estate of two 1920×1080 monitors put next to each other.

In fact, since the ASUS VG49V is 49 inches in size, you are practically getting two 27-inch 1080p monitors, just without the bezel in between. This also means you get the same pixel density as you would on a 27-inch Full HD monitor, which amounts to around 81 PPI.

Such rather low pixel density will make tiny items like text appear smudgy and blurry while icons will look ‘zoomed-in’ with an obvious lack of detail. Therefore, we don’t recommend this monitor if you read and type a lot or for professional purposes; it’s mainly intended for gaming.

When sitting a bit further from the screen, which you’ll obviously do due to the huge screen size, the low pixel density becomes less noticeable therefore allowing the gaming experience to feel immersive.

Most VA panel monitors have prominent ghosting due to their slow response time speed. Just like Samsung’s model, the ASUS VG49V will address this by using the 1ms MPRT (Moving Picture Response Time) backlight strobing technology.

ASUS calls their motion blur reduction technology ‘Extreme Low Motion Blur’ which further decreases ghosting of fast-moving objects. It can be enabled only at fixed refresh rates of 85Hz, 100Hz, and 120Hz. Furthermore, it can’t work at the same time as AMD FreeSync.

Moving on, if you have an AMD FreeSync-compatible card, you will be able to synchronize its GPU’s frame rate to the monitor’s refresh rate within 48-144Hz range. This means that as long as you stay between 48 FPS and 144 FPS (Frames Per Second) in games, there’ll be no screen tearing nor stuttering whatsoever.

If your framerate dips below that, LFC kicks in to double the framerate and maintain the gameplay fluidity.

Finally, ASUS has also revealed that the input lag of the VG49V is 11.9ms which is pretty impressive if proven to be true by later testing. Although display manufacturers don’t usually specify the input lag performance, it seems ASUS may start doing so and hopefully the rest of monitor companies will follow. 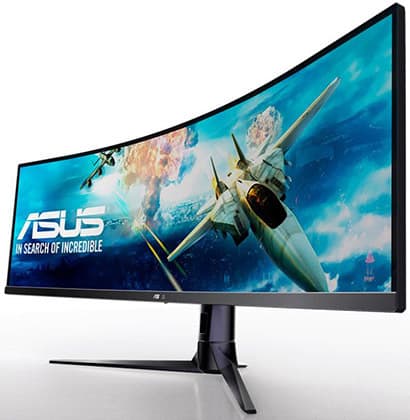 Display connectors include two HDMI ports and a DisplayPort. There are also two 5W integrated speakers and a headphones jack available. At the moment, ergonomic abilities of the monitor are unknown though at least the stand looks a lot better than that of the CHG90.

The ASUS VG49V price and release date are unknown at the time of this writing.

MSI also has their own model which offers the same specs as the ASUS VG49V and it’s dubbed as the MSI Optix MAG491C.

Since the monitor is based on an already existing panel used in the Samsung CHG90 but without the quantum dots and AMD FreeSync 2, the ASUS VG49V 144Hz monitor can be considered as a solid cheaper alternative.

For most, a 1080p vertical resolution is just too low for a display of such size; those might be interested in Philips’ upcoming 49-inch 5120×1440 model instead.