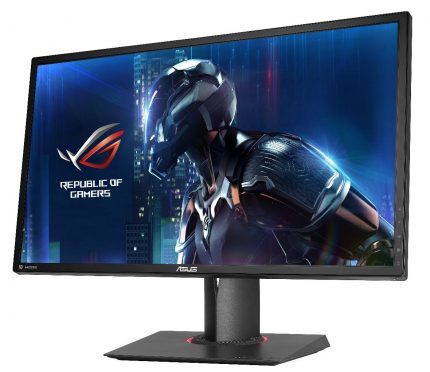 We all know the ASUS VG248QE, one of the first 144Hz monitors in the world that completely took over the gaming community and paved the way for the 144Hz “revolution”. With the combination of strong pixel response times, which is allowed thanks to the nature of TN panels, good pixel overdrive settings, minimal input lag and a reasonable price tag, the monitor still remains a good choice 3 years after the release date.

But the good things doesn’t stop at 144Hz anymore, even though higher refresh rates than this will provide little visually noticeable improvement as you will get diminishing returns. Therefore, the price tag must be set fairly in order for the 144Hz+ monitors to succeed and we expect a wide variety of these monitors to be released in the forthcoming time. One of them is the ASUS PG248Q, which was announced at Computex 2016. The monitor also goes by the longer title, ASUS ROG Swift PG248Q. This new gaming monitor from ASUS supports an overclocked refresh rate of 180Hz with the help of the NVIDIA G-SYNC feature that it also supports. The G-SYNC variable refresh rate range (VRR range) is 30Hz-180Hz. Other noticeable specs for the gaming screen include a Full HD resolution (1920 x 1080), a TN panel, and a matte anti-glare screen coating. Furthermore, the response time is only 1ms and the maximum brightness is 350 cd/m2 (Nit).  The monitor is also confirmed to feature Flicker-Free technology to prevent eye strain and headaches from longer periods of usage.

Other noticeable specs for the gaming screen include a Full HD resolution, a TN panel, and a matte anti-glare screen coating. Furthermore, the response time is only 1ms and the maximum brightness is 350 cd/m2 (Nit).  The monitor is also confirmed to feature Flicker-Free technology to prevent eye strain and headaches from longer periods of usage. We have also got confirmation that this monitor supports ULMB (Ultra Low Motion Blur), which will eliminate ghosting effects and motion blur.

In regards to styling, the ASUS PG248Q adopts the “ROG SWIFT” style since it is a member of this gaming monitor series by ASUS. The bezels are more slender than usual monitors, but still not as much as the thinnest gaming monitors out there. The monitor stands will support the Light in Motion feature (a red ring) by ASUS and will include a joystick for an easy and intuitive control of the OSD system. The stand is also fully adjustable with options for height, tilt, swivel and pivot adjustment support. VESA (100×100) mounting holes are also attached to the monitor so you can mount it on a wall or a VESA supporting mount or stand. Another cool feature are the handy “GamePlus” features, which allows the monitor to display an on-screen crosshair, a timer and a refresh rate counter (FPS counter, when G-SYNC is enabled) which will display the refresh rate (FPS if G-SYNC is enabled) that the monitor is running at.

There are not yet any information regarding connection options, the price tag and the availability for this ASUS monitor. We only know that DisplayPort 1.2 (or above) and at least one HDMI port will be featured. We’ll be sure to update this description once we get more information for the ASUS PG248Q.