ASUS and Acer have got to be the only brands you can count on right now innovate the gaming monitor scene. Just recently, both companies showcased seven new G-SYNC monitors combined, where four of them were from Acer and three of them were from ASUS. One of the monitors in question was the ASUS PG27AQ, a 27-inch 4K IPS G-SYNC gaming monitor. Interestingly, Acer showcased another monitor that had the exact same specs and the same panel, the Acer XB271HK. The ASUS PG27AQ is also called the ASUS ROG SWIFT PG27AQ, as it is basically a higher resolution monitor of the ASUS PG278Q.

In case you didn’t know already, G-SYNC is the future of gaming along with the cheaper version FreeSync. They are technologies from NVIDIA and AMD, respectively and they will eliminate any screen tearing just like V-SYNC, but you won’t get any additional horrible input lag like you would with V-SYNC. It does this by letting your GPU control the refresh rate of your monitor, which synchronizes it to the FPS of the game you’re playing. Of course, there’s a range in which G-SYNC and FreeSync works, but the specific range for this particular monitor is not yet known. More information about that as we get closer to release date. The technologies are here to stay, believe that.
The panel only operates at a maximum of 60Hz, so expect a G-SYNC range of 45-60Hz like we saw with the Samsung U24E590D.

Other than that, the monitor is 27-inches as mentioned, which is the sweet spot for a majority of gamers. Besides that, it offers a 4K (UHD) resolution, meaning that is has 3840×2160 pixels, which is four times as many as a Full HD display. Things might get a bit small on the 27-inch display, but everything will look crystal sharp. It’s also a 4K IPS panel, where IPS means “In-Plane Switching” and is one of the superior panel types. It offers great viewing angles, color reproduction and deep blacks, which is something that you definitely won’t be seeing in a TN panel. 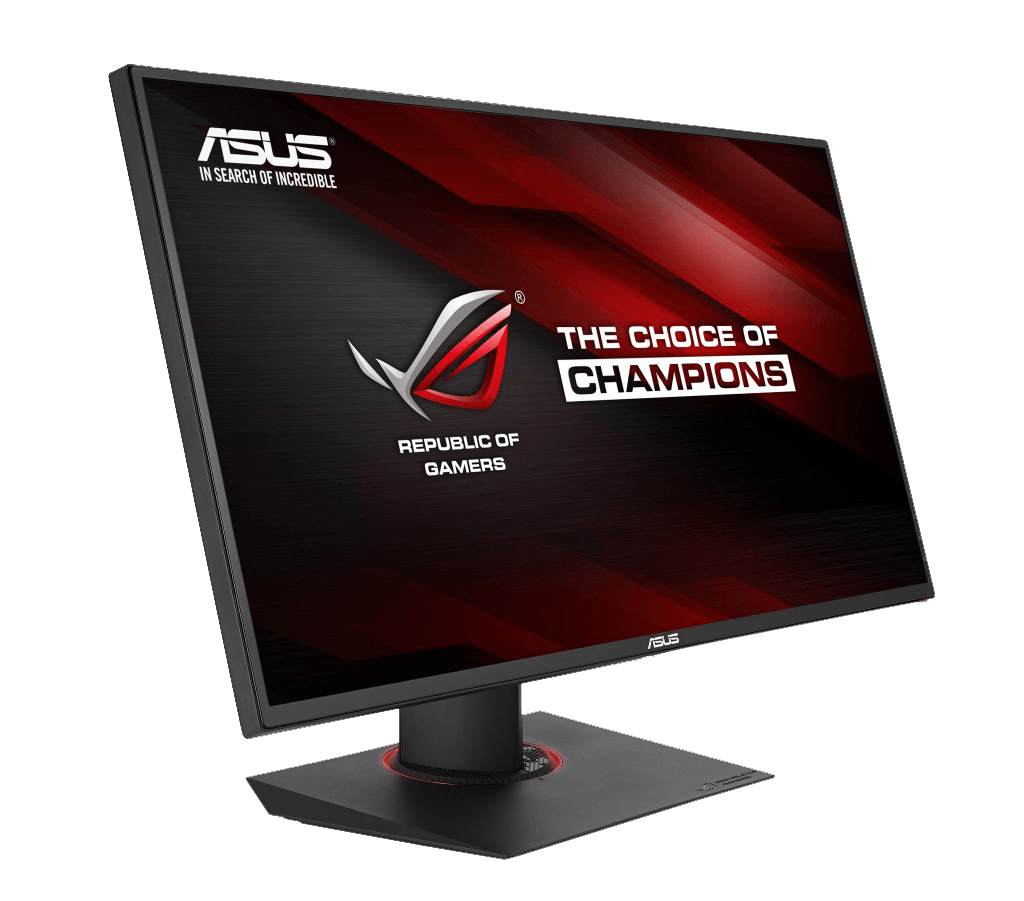 The ASUS PG27AQ offers a contrast ratio of 1000:1, which is pretty standard for an IPS panel and a brightness of 300 cd/m2 or 300 Nit as it is also called. It has an LED-backlight and the monitor has an easy-to-navigate OSD and a five-way joystick with hotkey shortcuts. The stand also has an ergonomic design with full tilt, swivel, pivot and height adjustments. It also has a smart cable management and the bezel is very thin, which makes it hassle-free to include in a dual-monitor or triple-monitor setup if you would like it.

The monitor will be released in Q3 2015 or Q4 2015 and the price of this monitor is still unknown. We will update this article as we get closer to the release date.