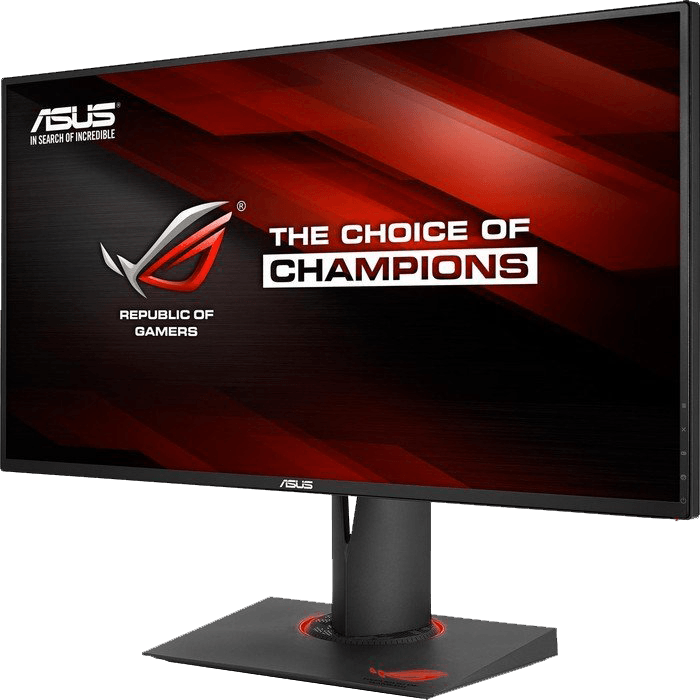 Update: This monitor will support an incredible 165Hz refresh rate with G-SYNC mode enabled. The monitor has also now been released in Europe and the United States.

For a long time, the Acer XB270HU has had the honor as being an exclusive G-SYNC 1440p 144Hz IPS monitor, but it will soon be challenged by the Asus PG279Q. This monitor was featured at Computex 2015 and will be available in Q4 2015 according to ASUS ROG Nordic. When the news about this monitor first came out, a lot of people were excited, since the Acer had so much trouble with severe backlight bleeding in the XB270HU that Amazon had to stop selling the monitor and review it, but it has seemingly been fixed, or at least to a certain degree. With the Acer XB271HU coming up, which also supports a 165Hz G-SYNC overclocked refresh rate, things might change though.

The display has a maximum supported resolution of 2560×1440, also referred to as WQHD resolution. For a majority of gamers, this particular resolution is the most preferred one because of the faster GPUs you can get nowadays. They aren’t powerful enough (at least one of them) to be sufficient for 4K gaming at high refresh rates, so 1440p at 144Hz will have to do. Refresh rate means a lot more than resolution for most people anyways, so that is not a problem. And to top it off, this monitor is capable of reaching a maximum refresh rate of 165Hz when G-SYNC is enabled. Just check out the official product page on the ASUS PG279Q and see all the awesome features for yourself in the beautifully designed landing page.

This monitor should not be confused with the Asus MG279Q, which is a 27-inch 144Hz 1440p FreeSync monitor with IPS panel, or the upcoming Asus PG27AQ, a 27-inch 4K IPS G-SYNC monitor. The Asus PG279Q features an excellent IPS panel, which will inevitably give you a much better color quality and general vision experience, and also superior viewing angles, which means that the colors won’t shift when viewing the monitor from the sides. When this monitor gets released, Asus has both FreeSync and G-Sync 144Hz IPS monitors at 1440p resolution, and will thereby force each other to lower their prices because of the competition. Us consumers always like competition because prices will be lowered, so hopefully we will see some pretty good deals on either the Acer XB270HU or this monitor when it gets on sale.

Connectivity options include DisplayPort and HDMI, but the DisplayPort connection has to be used to take advantage of G-SYNC and the 165Hz refresh rate as well. We predict that this will be a popular seller along with the XB271HK, so grab yours as soon as you can if you are interested in buying this monitor. The only downside that we can find is the price, but that’s because of the G-SYNC module.

You can see an overview of the specifications below. We will see if we can get hold of one that we can review so stay tuned!

Update: We have tested this monitor and have recommended it in our guide as we find it to be the best gaming monitor 2016.

The price of the Asus PG279Q is around $799 and it has already been released in Europe and the United States.