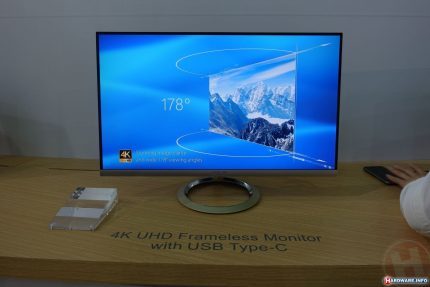 ASUS has made some great and exciting announcements recently and the ASUS MX27UC is no exception. The monitor also goes by the longer name, ASUS Designo MX27UC. We don’t know much about this monitor just yet, we what we do know is that it is 27-inches large and it has 4K resolution (Ultra HD, UHD, 2160p). As you can see in the picture above, the ASUS Designo MX27UC has a beautiful frameless design and a round stand with wireless charging capabilities (Qi). We knew about this monitor from CES 2016 at the start of this year as well.

The most notable feature is that the ASUS MX27UC has full USB 3.1 Type-C support, which supports features, such as USB Type-C Power Delivery (USB PD), DisplayPort Alternate mode and last but not least, data transmission. The other Designo monitor revealed at the same this as this monitor, the ASUS MX34VQ, is 34-inches large and has an 21:9 aspect ratio and a so-called UWQHD resolution.

Panel type found on this display will be of IPS (In-Plane Switching), which will cover 100 percent of the sRGB color spectrum. This ASUS Designo monitor also has a pair of speakers, but not as powerful as its larger sibling, as it only features 3-Watt Bang & Olufsen stereo speakers. While this display is not a gaming monitor, it can still be used for properly for casual gaming, but don’t expect as good a performance as a dedicated gaming monitor.

We don’t have much information about this monitor yet, but we’ll update this article as we get more information from ASUS and other reputable sources.