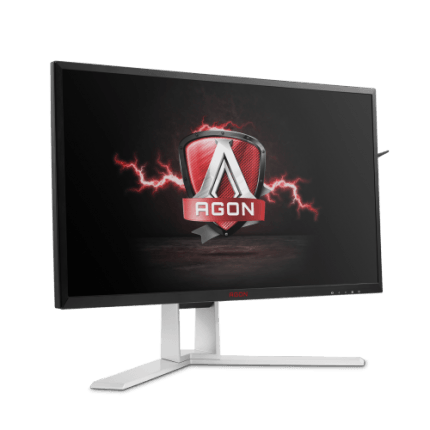 AOC has announced the upcoming AOC AG241QG gaming monitor. The display is also known as AOC AGON AG241QG as it is a part of the AOC AGON gaming monitor lineup from AOC. The panel used in this monitor is from AUO and it boasts a solid 2560 x 1440 (WQHD) resolution. At 24-inches, this means that the gaming monitor will feature a good 123,4 PPI, which is roughly 13% more than a 27-inch WQHD screen.

Other good features about this monitor are the support for NVIDIA G-SYNC, which works all the way up to 165Hz and a 1ms response time. Without it enabled, you will “only” reach a maximum refresh rate of 144Hz. The G-SYNC range for the AOC AG241QG is 30Hz – 165Hz. Since a TN panel is used in this monitor, it will also feature a 1ms response time (GtG) like other TN panels produced these days. Viewing angles are specified to be 170/160° and a 1000:1 contrast ratio is specified as well. The display is also flicker-free and has support for the sRGB color space. ULMB (Ultra Low Motion Blur) is supported by this monitor as well.

Looking at other specifics, 100 x 100mm VESA mounting options are available and the stand is fully adjustable with options for tilt, swivel, height and pivot. Pure aesthetically, the AOC AGON AG241QG resembles other gaming monitors in the AOC AGON gaming monitor series, as you wcan see a solid metal foot to the stand and matte black plastic around the screen. Furthermore, a pullable headphone hook is found on the left side.

AOC also revealed the AOC AG241QX – the so-called QX model – which features AMD FreeSync instead of G-SYNC. It also features Low Blue Light and AOC Shadow Control, which will increase brightness in dark areas. A wired keypad for easy OSD (On-Screen Display) navigation is also included. Connectivity-wise, you will get a HDMI port, four USB 3.0 ports, a 3.5mm headphone jack and a DisplayPort 1.2 input.

In both models, you will get integrated speakers, but with different wattage. The AG241QG features 2W speakers and the AG241QX features 3W speakers. Both these gaming monitors will be released in September and the AG241QG will cost roughly $675 USD (converted from £519). The AG241QX, which supports FreeSync instead, will cost around $500.