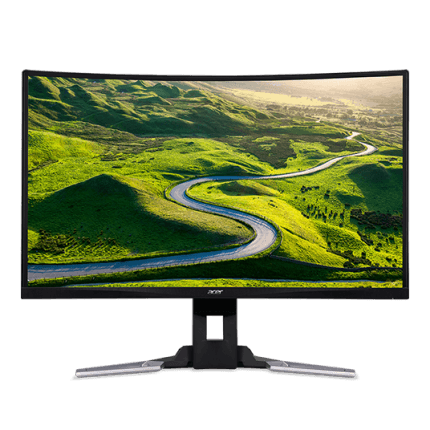 Acer has recently released some new gaming monitors. For the purpose of this article, we will discuss the new Acer XZ321Q gaming monitor. In their British site, Acer describes this awesome gaming screen.

Let’s start off with the basics: the 32-inch Acer XZ321Q monitor (31.5-inch actually) features a curved display, which is a feature that many gamers are on the look for. Furthermore, the resolution is 1920 x 1080, which results in a PPI (pixels per inch) of just 70.

The panel used in the Acer XZ321Q is a VA panel, which will provide good viewing angles, great contrast ratio and superior black levels. Furthermore, the maximum supported resolution is the magical number – 144Hz. Adaptive-Sync is also supported in the form of full support of  AMD FreeSync technology, which is great as you won’t experience screen tearing or stuttering.

Response time is specified to be 4ms (Gray-to-Gray) and a total of 16.7 million colors are supported, indicating that an 8-bit panel is used. Other notable features include the USB Hub, the 300 Nit brightness spec and finally the 7-Watt DTS Surround Sound speakers that are built in. There’s also Acer VisionCare and Acer BluelightShield technology inside this monitor.

Connection options are as follows: two HDMI ports (one with MHL), one DisplayPort and one Mini DisplayPort. There’s also a USB 3.0 upstream port, four USB 3.0 downstream ports and an audio line-out port. The screen coating used in this gaming monitor is anti-glare and there’s full height (120mm), pivot (60°) and tilt (-5° to 25°) adjust settings available.

The Acer XZ321Q can be found in either silver or black, and the product comes with a 2-year warranty. With the package, you get a DisplayPort cable and a SuperSpeed USB cable. The price of the Acer XZ321Q gaming monitor is around £420. We have no information regarding a price nor release in the United States, but in the meantime, you can read more about the PC screen here.