Acer has recently released the Predator XB270HU (January 2015), shortly followed by the release of the XG270HU (March 2015), the FreeSync variant of the high-end gaming monitor from the company. These will of course not be the only ones supporting these rivaling technologies, and Acer recently revealed another G-Sync model, the XR341CKA. Acer claims it’s worlds first curved G-Sync gaming monitor. Furthermore, they revealed the FreeSync variant, the Acer XR341CK.

The Acer XR341CK is a 34″ Ultra-Wide gaming monitor, which means that it has an aspect ratio of 21:9, instead of the usual 16:9. It has a maximum supported resolution of 3440×1440, a refresh rate of 75Hz and a response time of 4ms. Furthermore, it comes with an IPS panel, which gives better color representation and better viewing angles than the more common TN panel.

It was previosly rumored that the monitor would have 144Hz, but it has been confirmed that it will only support up to 75Hz at the maximum resolution. This is probably due to the IPS panel and having to deal with the extra width, since the Predator XB270HU has IPS panel too, but it supports up to 144Hz at 1440p. This monitor supports a FreeSync range of 30-75Hz, which is very good and better than we had expected. 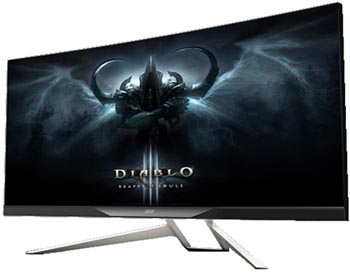 Furthermore, the monitor has some sweet 7W stereo speakers and a nice-looking aluminium base with an adjustable height and tilt. It supports HDMI 1.4 and DisplayPort, and it has 4 USB 3.0 ports.

The initial release will support Nvidia G-SYNC, but a FreeSync variant will be released a month or two afterwards. The FreeSync version will most likely be cheaper than its G-SYNC counterpart. It’s still a costly purchase, since the new XR model will cost $1300. Curved displays are a hot trend, and we expect more of these displays to arrive soon.

The Acer XR341CK is available for pre-order right now. For now, Acer seems to be the only company that can make you happy right now if you’re looking to buy a new high-end gaming monitor. Maybe ASUS can catch up soon? We will just have to wait and see. Acer has released a special promotion video of this particular monitor. You can watch it right below.

You can buy the Acer XR341CK by clicking on the link below.