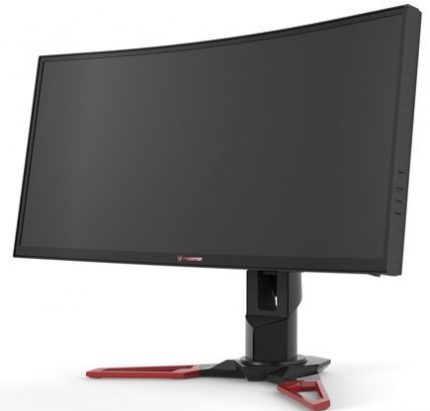 Apart from the screen size, the monitors also have other differences due to panels being used, but common for them all is the 100% sRGB coverage, 1800R curvature, and 2x 7W DTS speakers. They also have the Acer VisualCare technologies, which includes Acer Flicker-less technology that removes screen flickering, BlueLightShield, which eliminates harmful blue rays and of course also other Low-dimming technologies to protect your eyes and prevent eye strain.

In particular, the Acer Predator Z301C features a 200Hz refresh rate with overclocking, whereas the smaller 27-inch Predator Z271 features 144Hz. Furthermore, the Predator Z301 features a VA panel, which provides excellent black levels and contrast ratio, and the monitors also support NVIDIA G-SYNC technology that you can use to eliminate screen tearing artifacts without any performance costs! Now combine that and the 200Hz refresh rate with the 1800R curvature (the smaller, the curvier) and you got yourself a fast-paced, fluid, tear-free and immersive gaming experience. A 4ms response time is also specified along with a maximum native resolution of 2560 x 1080, which is commonly referred to as WFHD, or Wide Full HD. A 3D display mode is also supported, by the way.

Looking at ergonomics, you can adjust the height by 120mm, tilt the monitor from 5° to 25° and swivel it from -30° to 30°. Note that the tilt specification does not apply for all models in the Acer Predator Z1 gaming monitor series, so it’s not certain that this particular gaming monitor will feature tilt adjustment options.

We don’t have much more information about this gaming monitor just yet. This includes price details and release date, but we expect it to be released soon. You can view an overview of the most important specifications in the table below.