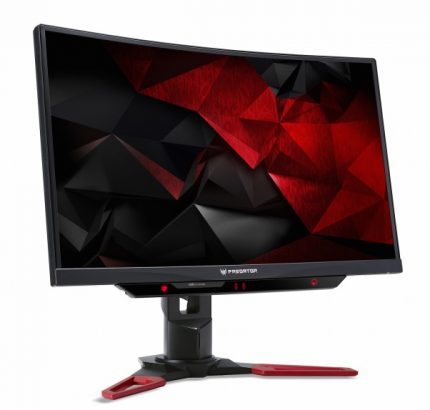 Acer has said that the eye-tracking technology will enhance immersion when you’re playing a game. Titles such as Deus Ex: Mankind Divided and a handful of Assasin’s Creed games support the feature already now. You won’t even have to pan the camera anymore since the game will do that for you as it tracks the movement of your eyes.

Looking at the specs of the Acer Predator Z271T gaming monitor, we know that the resolution is 1920 x 1080, known as Full HD or 1080p. This isn’t quite impressive on a 27-inch gaming monitor in Q4 2016, but Acer still decided to refresh the Acer Predator Z271 to include Tobii eye-tracking tech. The refresh rate of the Z271T gaming display is 144Hz, which is very good. The screen is also curved with a 1800R curvature. This number essentially means that if you were to make a full circle following the curvature of the gaming monitor, you’ll end up with a circle that has a radius of 1800mm or 1,8m. Furthermore, a 4ms response time is specified.

Other specs are identical to the Predator Z271 monitor, such as the VA panel type and NVIDIA G-SYNC support. We have no information regarding the variable refresh rate (VRR range) yet, but we’ll make sure to put that information in once we get it confirmed by Acer.

The Acer Predator Z271T gaming monitor is a part of the Predator Z1 series from Acer and it will be released in Europe in October 2016 with a price tag of $799. We have no word yet on a release date for the United States or a worldwide release. You can check the current price of this eye-tracking gaming monitor via the link below once it has been released.