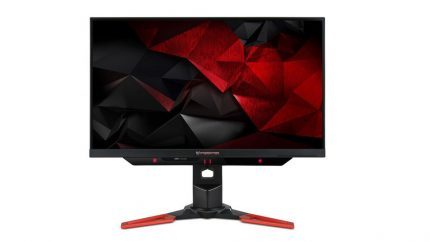 All three new gaming monitors feature Tobii eye-tracking technology, which has never been seen before on computer monitors. This technology will essentially enable you to track your eyes and interact with the system, software and games. Around 40 apps and games support this technology as of today and you can see the full list of Tobii eye-tracking supported games at the official page here. Among these games you can find Deus Ex: Mankind Divided, Arma 3, The Division and some games from the Assasin’s Creed series. The rest are just some lesser popular indie games, but the feature might be implemented in more games in the upcoming future.

Other specifications for the 24.5-inch Acer Predator XB251HQT gaming monitor include a 1080p resolution (resulting in a 90 PPI, or pixels per inch), a TN panel and finally, an impressive 240Hz native refresh rate. The TN panel, however, is a bit of a downside since it will deliver bad colors and viewing angles, unlike IPS panels. NVIDIA G-SYNC technology is also supported, meaning you will get a liquid smooth gameplay without stuttering or screen tearing. The Acer Predator XB251HQT is a fantastic gaming monitor for FPS games or other fast-paced games, where response time is imminent. Since it boasts a TN panel, we can count on a 1ms response time as well. No word yet on the G-SYNC variable refresh rate range (VRR range).

Looking at the outside of the computer display, you can see that it pretty much looks like most other gaming monitors from the Acer Predator lineup with the black and red color combination and the wide V-shaped stand as well. The bezel is very slim, which Acer has chosen to call ZeroFrame. The Tobii eye-tracking technology sits in the bottom side of the gaming screen. The Acer Predator XB251HQT will support DisplayPort 1.2, DVI and D-SUB (VGA).

We have no information regarding a release date or a price yet for this gaming monitor, but with the addition to NVIDIA G-SYNC technology and Tobii eye-tracking technology, both of which require a proprietary module to be installed in the monitor, you can expect a huge price for this gaming monitor. Unless you really need these features, then your money is better spent elsewhere. You can see the most important specifications in the table below, where you can also check the price once the monitor has been released.